Apple has just seeded iOS 8 beta 6 to testing partners, and in a decision apparently taken due to the imminent nature of the GM release, the tech giant has opted not to seed this one to developer. It’s usually the case that beta releases can be downloaded and tested out by those subbed to the Developer Program, but with the public release of iOS 8 now just a matter of weeks away, this sixth beta is preserved only for testing partners.

As per a report over at BGR, the latest beta build “must be accepted by all testing partners by September 5th,” which makes sense given that the next-gen iPhone looks set to be announced just four days thereafter, on September 9th. By the end of next month, the 4.7-inch iPhone 6 is likely to have hit shelves, and although the larger variant, rumored to be called the ‘iPhone Air’ or ‘iPhone 6L’, may well be subject to delays, it’s imperative for Apple that iOS 8 is essentially primed and ready in time for the announcement. 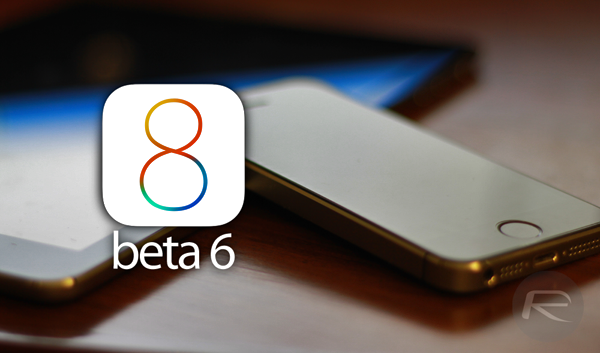 iOS 8 beta 6 includes a myriad of bug fixes and general performance enhancements as the end-user date draws closer, and below, you can check the changelog of the release itself in its entirety.

As mentioned before, iOS 8 beta 6 is a pure bug fix release, and brings nothing new to the table.

First announced at the Worldwide Developers’ Conference (WWDC) back in June of this year, iOS 8 is quite a significant advance on the current software version, with Apple having finally opened several key areas up to third-party developers. As of iOS 8, users will be able to download famed keyboards ranging from SwiftKey and Fleksy through Swype and others, while widget support and major tweaks to Siri should make for an much-improved overall experience.

Of course, as far as Apple is concerned, we cannot wait to get our hands on the next-gen handset, but as we get caught up in some of the touted features of the iPhone 6 / 6L, it’s important to remember that the software is every bit as crucial to the overall experience.

Thus, we’ll be keeping a very close eye on iOS 8’s developments in general, including the iPhone 6, and hopefully, our next coverage on the matter will be with regards to the GM roll-out.