Apple has today taken an additional step in the progression of macOS Sierra by releasing the third pre-release seed of macOS 10.12.3 to users registered on the Apple Developer Program and with compatible Mac hardware.

This latest update sees Apple once again requesting the input and guidance of developers to finalize macOS 10.12.3, and follows on approximately three and a half weeks after the initial 10.12.3 beta was released back in December 2016. 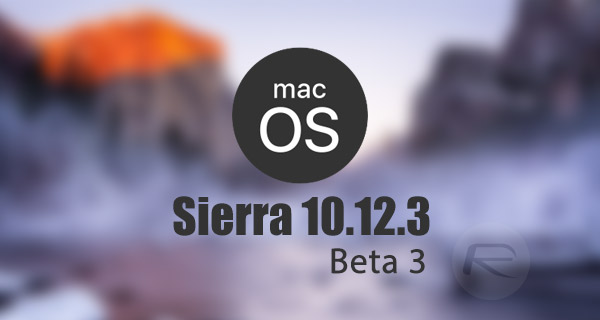 It has becoming something of a tradition with Apple, but once again the company hasn’t exactly decided to spoil developers with accompanying release notes or changelog. Like most beta builds of macOS, this latest pre-release seed once again stipulates that the update “improves stability, compatibility, and security of your Mac”, meaning that those installing it can expect a beta build that features relatively minor outward-facing changes, if any.

Still, we should all know by now that decent and must-have releases don’t always need to include huge functionality changes and feature additions. Although this is a relatively minor version bump, Apple has still taken the necessary engineering resources to ensure that the overall macOS Sierra experience has been improved with 10.12.3.

In order to achieve that, macOS 10.12.3, and specifically this latest seed, includes under-the-hood improvements and enhancement that should make all Macs running macOS Sierra a more secure, and ultimately pleasurable place to be. That also includes ongoing changes and improvements to the latest Mac hardware; the 2016 Touch Bar MacBook Pro. As always, if anything new does crop up with this beta, will let you know instantly.

It certainly won’t be long now until Apple takes the final step and releases macOS Sierra 10.12.3 to the general public. This particular version has been in testing for coming up to a month, and given the relatively small nature of the improvements, it’s likely that a public release is on the immediate agenda.

As always, the latest macOS 10.12.3 beta is available to download and install immediately from the Mac App Store to those who are currently running a previous pre-release seed of macOS 10.12.3.