Apple’s stance on jailbreaking has always been quite clear, with the Cupertino company clearly and vehemently discouraging users from doing any custom software modifications to their iPhone, iPod touch or iPad, which the jailbreaking process usually entails.

According to an official pointer in the ‘Apple Retail Store Purchase Policies’ that “emphatically” reiterates this point, requests users to refrain from jailbreaking at all costs. 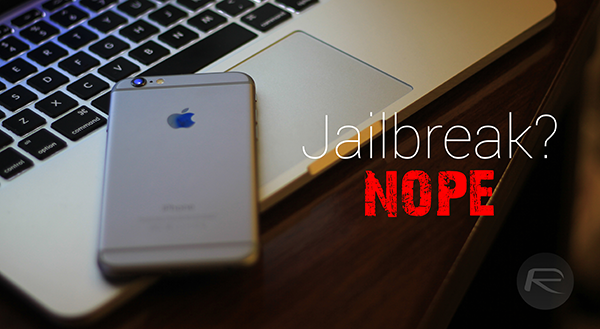 The said piece in the policy is stated henceforth, and is definitely worth a read:

Making unauthorized modifications to the software on an iPhone violates the iPhone software license agreement. The common term for modifying an iPhone is jail-breaking, with a particular emphasis on the second part of that term. That’s why we strongly, almost emphatically, recommend that you do not do so. Really. Should you be unable to use your iPhone due to an unauthorized software modification, its repair will not be covered under the warranty.

As you would notice, the Cupertino tech firm, to its benefit, splits the term “jailbreaking” into two, and emphasizes the part that has to deal with “breaking” the device. Apple’s stance here is simple; you jailbreak and install custom software, which Apple doesn’t authorize to be safe, then you run a risk of breaking your device. And to further establish its point that jailbreaking is bad, Apple won’t cover a jailbroken device under its warranty policy, even if the problem isn’t software related. If you have a jailbroken device, you’ve void your warranty and any repairs will cost you instead of being covered under warranty, as well as earning you some glares from Apple employees in whatever store you take the device to.

This stance, or the policy, isn’t something new. Apple has long maintained this standing against jailbreaking, and long considered warranties void if you modify your iOS device’s software through these means. The wording, however, is quite interesting, because Apple’s word play on ‘breaking’ has made it all the more clear how the tech giant sees custom software modifications.

It’s noteworthy that should you have a jailbroken device that needs to be claimed under warranty, you’d want to do a clean restore using iTunes before taking it to the Apple Store. That way, you can remove all traces of the device ever being jailbroken, and will not lose your warranty coverage as well.