In the lead-up to the Evad3rs jailbreak of iOS 7.0.x with the Evasi0n tool, many had begun to doubt whether Apple’s continued efforts to plug exploits had got the better of the jailbreaking community, and that the hackers had essentially hit a brick wall. Zoom forward one year, and following on from two jailbreaks for iOS 7, we now have our second for iOS 8 – this being just two months after the latest software first appeared back in late September. TiaG has, over the past few days, taken care of iOS 8.1.1 as well as the currently beta iOS 8.2, and while some jailbreakers have been a little hesitant given that it essentially emerged from the ether, one seasoned jailbreaker has declared it safe to be used.

Whenever you go ahead and jailbreak, there’s a certain amount of calculated risk involved. Since you’re allowing a tool to access deeper system files, there’s always the heightened chance of security lapses, but while TiaG’s impromptu release has drawn a fair amount of skepticism, MuscleNerd has added a few encouraging sentiments on the brand-new jailbreak via his Twitter page. 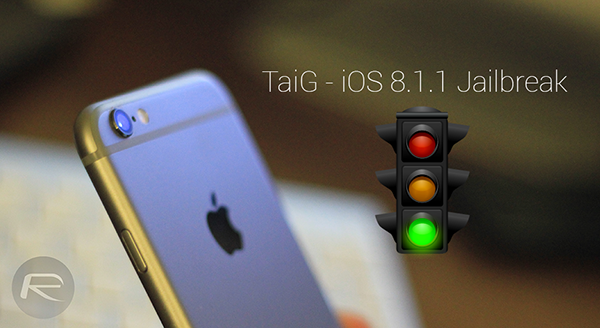 Nothing too unsettling with that TaiG JB…just some light device fingerprinting. To see that, create an empty debuglog.cfg file next to the exe file. From then on, when you run the tool it’ll log the urls accessed in a log/.log file. The untether is much more transparent than Pangu (unobfuscated, and kernel is left open to inspection via "standard" task_for_pid0 patch) 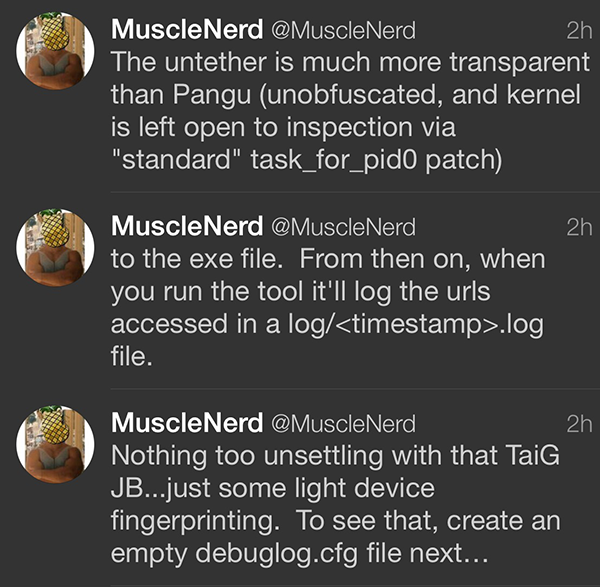 MuscleNerd goes on to note that the untether "is much more transparent than Pangu," which is always a good thing, so if you’ve held off jailbreaking your iOS 8.1.1 or iOS 8.2 beta device through fear of the unknown, then you can now comfortably go ahead and follow the tutorials outlined at the foot of this post.

The "light device fingerprinting" that MuscleNerd mentions is not a major concern as such, and given the consensus of the wider jailbreaking world, TiaG is as smooth and seamless a jailbreak as we’ve had so far.

So, kudos to the TiaG team for coming through with another untethered break so swiftly once more, and should we hear of anything noteworthy pertaining to TiaG or jailbreaking in general, we’ll have it covered right here.