Apple Music appears to be on a growth trajectory on par with Spotify, the world’s current largest music streaming platform. It appears to be a case of “if Spotify can do it, then we can do it”, which now also translates across to offering a 50-percent discount for students who are enrolled in an eligible college or educational establishment.

A greater than normal focus has been applied to the Apple Music platform over the last ten days or so. First, there was Tim Cook’s announcement during the earnings call that the streaming platform now had 13 million active and paying subscribers. A figure that’s up 2 million from three months ago.

Then came the speculation that the Apple Music platform was going to have a UI and function overhaul to be announced and shown off in the first instance during this year’s WWDC in June. They say everything comes in threes, which paves the way perfectly for the announcement of a new 50-percent student discount for Apple Music subscription, bringing it down to just $4.99 per month.

The great news is that Apple is also taking the opportunity to bring the student discount offer to Apple Music subscribers outside of the United States. Residents of other countries including United Kingdom, Denmark, Ireland, Australia, and New Zealand can also avail the 50-percent discount on the monthly subscription if they happen to be studying at a college or university that is listed under Apple’s eligible establishments. Subscription prices vary from country to country outside of the U.S. but whatever the advertised price, it is now reduced by 50-percent for students. 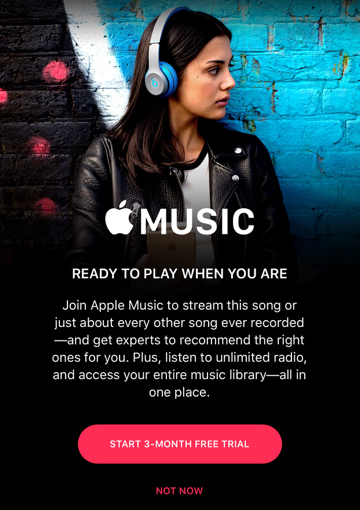 The new subscription offer is rolling out right now to users in supported regions, and is offering up to 4 years of subscription at the discounted price as they carry on with their studies. That’s not limited to four continuous years either. Students will essentially be able to pause a student membership and pick it up again at a later date. Not only can we expect to look forward to a new, and hopefully more usable Apple Music experience this coming WWDC, but Apple can also expect subscriptions to increase significantly thanks to this money saving offer.