The iPhone XS and iPhone XS Max have largely received great reviews since their arrival a couple of weeks ago, and most people have been enjoying their new iPhones without issue.

That being said, it wouldn’t be an iPhone launch without there being some sort of potential problem, and it seems that some users have reported that they are experiencing LTE connectivity issues.

Apple is said to be looking into the problem, with one iPhone XS Max owner reporting that Apple is in the midst of an outreach program with some of those who are experiencing issues.

According to the iPhone owner, Apple has had him install a baseband logger in order to ascertain whether there is a deeper issue that needs to be rectified here, with other users also reporting that Apple engineers have been in touch to ask for logs and such.

With the iPhone XS and iPhone XS Max going on sale on September 17th, a few people started to report connectivity problems almost immediately although the vast majority have not experienced anything of the sort. In fact, to the contrary, many have reported that their iPhone XS and iPhone XS Max are able to receive stronger LTE signals than ever, while also being able to perform speed tests with speeds never before seen on an iPhone. 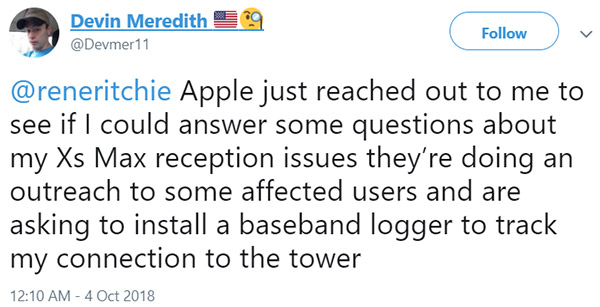 If there is indeed a fix to be made in software, it will likely arrive as part of an iOS 12.1 update, with the second beta of that release currently being worked with and in the hands of developers. Interestingly, that release already upgrades the modem firmware from 1.01.20-1 to 1.01.12, but some users appear to suggest that this still does not solve the issue being faced.