We reported recently of the iPad coming to Verizon. Well, starting from today, Verizon Wireless and AT&T will sell the iPad directly from their stores. The iPad will be sold in three different packages starting from $629 and going up to $829. 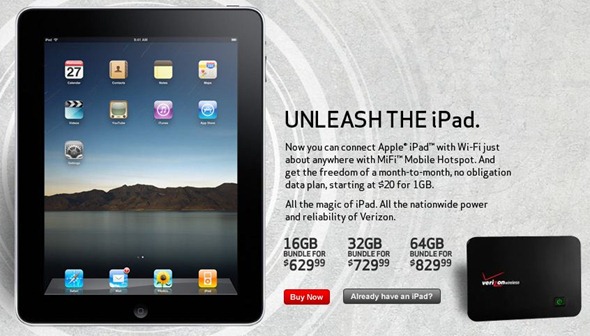 If you haven’t bought an iPad yet and are considering getting it now, I personally suggest you go for the AT&T iPad. It offers more value per GB and gives you access to AT&T’s free hotspots. Verizon’s deal means you’ll have to carry the MiFi device everywhere which, for your kind information, lasts only 5-6 hours compared with iPad’s 10hr+ battery time.

But that besides the point. This is the Apple iPad coming to Verizon. Could this precede the Verizon iPhone 5?