You know the countdown to an Apple event is officially on when the Cupertino company’s minions begin to adorn the venue with branded insignia. It’s only a matter of days now until Tim Cook and his executive team descend on the Bill Graham Civic Auditorium to deliver a keynote presentation that will ultimately shape the fortunes of the Cupertino-based company for the foreseeable future. In order to have the venue ready for the media and attending guests, Apple has started to decorate the venue with company branded flags and logos.

A number of excited, eager and keen-eyed Twitter and Instagram users have been utilizing the global reach of the social networks to share images of the Apple-branded decorations going up at the Bill Graham Civic Auditorium. A photo coming in from CBS photographer James Martin shows us that Apple has gone down the route of utilizing the same visual style that was on the official event invitations, by displaying a white Apple logo against a blue backdrop that is alive with accents of varying colors behind the iconic Apple logo. 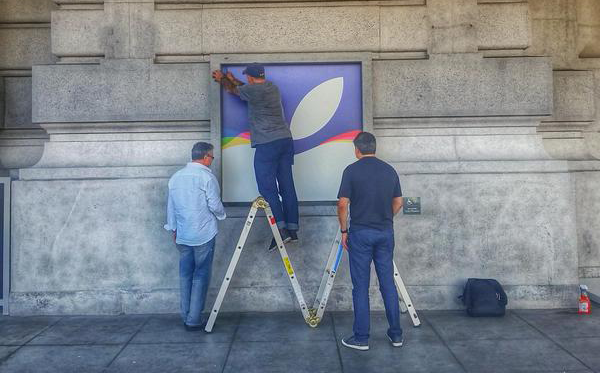 Apple’s team has also worked in conjunction with the venue staff to erect a number of high-gluing flags and poles around the Civic Center. The flags clearly show off a white Apple logo on top of a dark blue/purple background, kind of similar to the uniform colors that Apple Retail staff wear around the world. We’re used to Apple adorning various venues with marketing material and banners relating to a specific event, but the early signs seems to suggest that Apple is going to go all out on this one, with banners, signage, and company insignia, hinting that that this event may surpass the one’s we’ve come across previously. 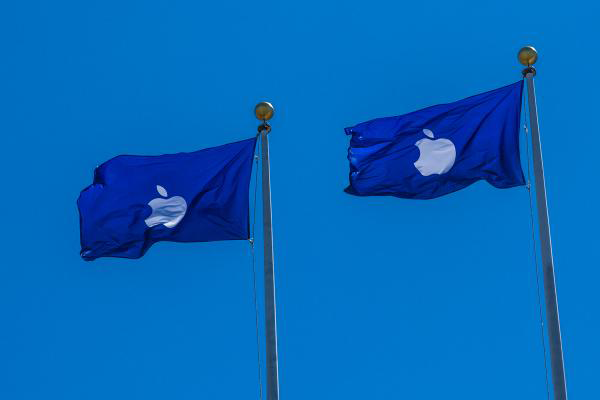 Excitement and expectations levels are at an elevated state for the event this coming Wednesday. The keynote speech, fronted by Apple CEO Tim Cook, is expected to be highly iPhone-centric, focusing on the introduction of the iPhone 6s and iPhone 6s Plus. Apple is also expected to announce a range of new iPads, the next-generation Apple TV complete with App Store, Siri and a brand new remote, and a range of new bands and body finishes for the Apple Watch. Oh, and there’ll also be a GM version of iOS 9 and watchOS 2 to be released on the same day.