With steadily increasing sales, Apple now has enough cash to buy the entire mobile phone industry, except for Samsung, at least if this estimate is to be trusted.

According to recent estimates, Apple is expected to have about $70 billion in Cash, Cash Equivalents, Short-term marketable securities and long-term Marketable Securities. This money is used for running the company and making investments, which can include acquisitions. If the company were interested in substantially expanding its market share, just how much of the mobile phone industry would it be able to purchase?

In order to answer that question, this study looks at the market value of Apple’s main competitors. That’s roughly how much those companies would likely be sold for.

Samsung’s mobile division is the highest valued, standing at $50 billion; followed by HTC at $25.4 billion; Nokia at $22.6 billion; RIM at $13.8 billion; Motorola at $4.2 billion; and lastly Sony Ericsson at $3 billion. Most of those companies, which have seen declining sales over the last few years, will likely have their value decreased, while Apple keeps skyrocketing.

In short, Apple would be able to buy up all of its competitors at once, aside from Samsung (which, ironically, the company is currently suing), and give itself an immediate market share boost. The graphic below really shows how dominant the Cupertino company has become: 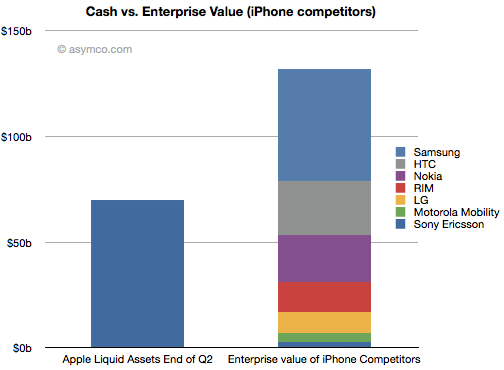 At first, this date might appear staggering at first, but this study seems to miss an important fact: while companies like Motorola or Nokia only sell handsets, Apple sells computers and several other consumer devices as well, which have largely contributed to the amount of money the company has earned over the years. While the iPhone is certainly one of its most popular products, Mac sales have actually increased dramatically over the last few years, with many buyers being new to the Mac platform.

What would happen if Apple bought up the whole phone industry? Most likely, anti-trust regulators would put a stop to such a move, since Jobs’ company would become a monopoly with many brands all over the world that would quickly phase into just one.

There also wouldn’t be much of a point in buying most of these brands. With their declining value, Apple will likely be better off building market share on its own, like it’s been doing. The company tends to only buy companies for the value of their products, not market share. Rather than buying its way up, Apple tends to assimilate talent and move forward as one.