Apple Bumps Up Price Of iOS And Mac Developer Program In EU, Here Are The Details

In order to develop and release applications through the App Store or Mac App Store, devs must be subscribed to Apple’s Developer program, which costs $99 per year in the United States. In the United Kingdom, the price has long been set at £60 per annum, which, at current exchange, is slightly cheaper than Stateside developers. However, Apple has hiked the price for some nations within the European Union, and while Brits looking to join the party will now have to pony up £79, the yearly premium has risen in Germany from €80 to €99.

At this point, the price alterations have just begun cropping up, and it’s unclear as to whether the decision to increase the cost is down to inflation-based adjustment or a general rise that’ll affect other areas at some point.

The value of releasing apps and games is such that the meager increase in subscription cost shouldn’t make a significant difference, and with Apple Watch on the horizon, there’s even more scope for creative and quick-thinking individuals to thrive as registered Apple Developers.

It may well be that Apple Watch’s addition to the fold is culpable for the rise, which theoretically adds value to the Developer Program, and with the WatchKit SDK already available, many have already begun to develop great experiences for the upcoming hardware.

From another angle, though, the fact that U.S. developers have yet to be factored in leads us to believe that the rise may only be applicable to the UK, Germany, and perhaps other Euro-based countries in due course, so until the Cupertino company releases any further pricing adjustments or makes an official announcement, the rationale is up for debate. 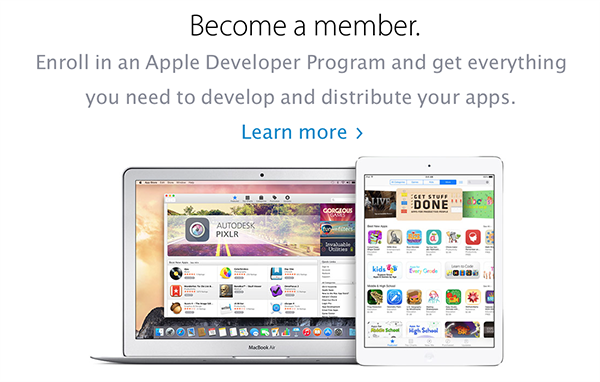 Whatever the reasoning, the bottom line is that those wishing to create iOS or OS X apps in Germany or the UK will now have to stump up a few extra coins, and given how many nations are currently tethered to the Euro, we’d anticipate further tweaks to the cost structure of Apple’s Developer Program.

Those affected, what do you make of the hike? Would it put you off the idea of creating Apple apps now or in the future? Do share your thoughts with us via the usual mediums!