Apple has surprised us all today by announcing a new and improved Beats Pill bluetooth speaker, and is calling it the Pill+. The new speaker isn’t a radical retake of the original Pill with Apple focusing on making some serious under-the-hood improvements to produce what could arguably be the best sounding Pill ever. Pill+ is set to replace the original Pill speaker which was launched back in 2012. It is larger than previous Pill, but smaller than now discontinued Pill XL.

Apple hasn’t updated or released any bluetooth speaker since it acquired Beats Electronics back in May 2014 for a sum of $3 billion, with the Mac-maker focusing largely on the headphone lineup that the Beats brand is exceptionally famous for. The Pill+ in that regard is a major milestone of Apple’s efforts into the speaker business. 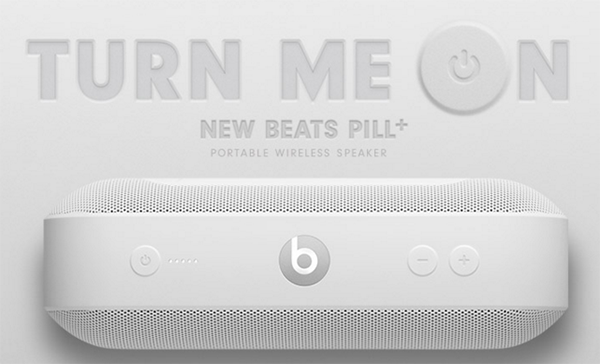 One of the most apparent changes interested consumers will notice with the new speaker is the lack of extra flair, with Apple opting for a more subtle and clean look. Gone is the Beats logo button on the grill, as well as the power and playback controls from the back. They have now been moved to the top of the speaker. On the back, you will now find one full-sized USB port, a 3.5mm audio input jack, and Apple’s proprietary Lightning port, all concealed by a subtle cover.

Apple is claiming that the sound on the Pill+ will be fuller than before, and the slightly bigger design of the speaker compared to the original Pill does add credibility to that claim. As for the woofer and tweeters housed inside the speaker, the Cupertino-based giant is telling us that “Tweeter and woofer separation uses the same acoustic mechanics found in professional recording studios around the world.”

But what good is the incredible sound if it’s not backed by enough battery power? Apple is telling us that the Pill+ will be good for up to 12 hours of constant music playback on a single charge, and if you’re a bit particular about these kinds of details, there’s a fuel gauge telling you just how much battery is left till your party halts to a stop. A full recharge is expected to take around 3 hours. The Pill+ can also charge other devices around you as well, through the USB port on its back as mentioned earlier.

The improvements however do come at quite the cost, especially compared to the price point of the originally Pill. Apple is charging you $229.95 for the Beats Pill+ and is giving you a rather basic color choice of black, or white. The speaker is expected to be available starting November this year.