App Activation Audio For iOS: Get An Audible Alert And Haptic Feedback When An App Is Launched

While the Cydia store for jailbroken iOS devices houses thousands of tweaks, enhancements and extensions, it is hardly surprising that we sometimes see modifications that offer the same functionality which we’ve already seen. The official App Store is full of apps which offer duplicate services, with the difference generally coming down to how the app is presented and how efficiently it offers its functionality. Cydia is no different, and with the repositories fast becoming saturated with tweaks, it stands to reason that some are going to be duplicated.

iOS developer Laurence Millar has recently released his App Activation Audio tweak onto the BigBoss repository, which he describes as "the best app activation audio there is". We have previously posted about other Cydia-based software which offers the same kind of feature, however, Millar’s effort seems be a highly polished and professional effort with looks and works a lot better than any of the competition which we have come across. For those that have yet to experience this or similar offerings, the tweak essentially forces iOS to give an audible alert when the user of the device launches an app from the device’s SpringBoard.

App Activation Audio exists to do one thing and one thing only, and in that respect you really can’t fault it. The audible alert is invoked when the user launches an app through normal methods and therefore doesn’t require any additional learning or knowledge. The tweak also installs no additional icons, and comes only with a simple dedicated settings panel which contains the ability to toggle the modification on or off, adjust the volume of the alert as required, select an app launch tone and also choose whether or not the device should provide feedback through vibration upon app launch. The settings panel is built upon extremely familiar user interface elements and provides no surprises to seasoned iOS users, allowing seamless integration of the tweak into everyday usage. 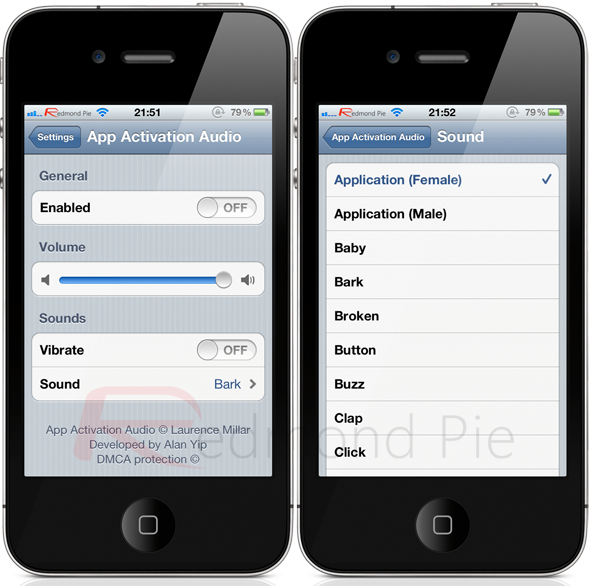 It looks and feels good, does exactly what it says on the tin and offers twenty built-in tones to choose from as well as the option of enabling haptic feedback, so what else is there? Well, the question remains why would a user want to be alerted audibly when an app is launched? I could see this, and other tweaks of this nature providing some real world benefit to users who are visually impaired so they have confirmation of launch, but even that is pushing for an installation excuse. One thing which would dramatically improve an idea like this, is the ability to configure it to announce the name of the app that has been launched, but whether or not this is possible from a technical point of view is a different story altogether.

If having your device give an alert when something is launched is something you have been waiting for, or require from iOS, then App Activation Audio is the best of its kind and worth a download. However, as a commercial tweak, retailing at $1.99, it isn’t something I can see a lot of people installing just to give it a shot.

App Activation Audio is available from the BigBoss repository at a cost of $1.99 and requires iOS 4 or above.