Android M Developer Preview 2 is now available to download. The newly released system images support Nexus 5, 6, 9, and of course the Nexus Player, which should give developers the chance to keep their apps up to date with the changes that will be introduced to Google’s mobile operating system down the road.

Google announced Android M at its I/O keynote back in May, and the announcement was followed by the release of the first developer preview for the Nexus lineup of devices. With the release of Developer Preview 2 of Android M, Google says that the second release has in fact been tweaked under the hood with some much needed bug fixes and performance improvements. “The update includes a variety of enhancements and bug fixes made across the system, including those related to issues reported by developers through the external issue tracker.” 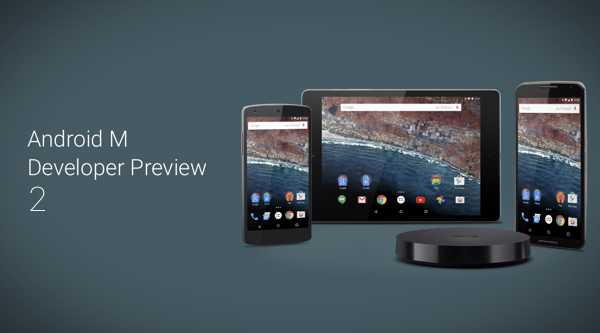 A good chunk of the focus has been put on fixing and improving ‘permissions,’ including the fingerprint scanner API, remote Bluetooth/WiFi MAC, WiFi, and Bluetooth. Being a preview – albeit the second version – the release will hiccup here and there including a possible system-wide Messenger app crash on a 64-bit emulator, while YouTube users may have to skip on the share function. The complete changelog of this release is embedded below:

The build – as should be obvious by now – is meant primarily for developers, giving them a chance to test out existing app compatibilities, or add something entirely new from scratch using the new Android M’s API set. However, there’s more than a fair chance that slightly advanced Android users would wish to give this new release a one-off spin, especially considering that any prospective consumer update is months away. Which brings us back to the usual warning associated with such beta releases of operating systems; Google is still far off from making this release a daily-runner, given the new set of APIs and internal changes being introduced to the Android world with the ‘M’ release, so if you care about general stability in day to day use, you are better off staying away from this release at this time.

Here are the direct download links of Android M, listed according to the device.

For instructions on how to download and install/flash Android M on your device from scratch, follow the guide here: