With so many different ways of measuring how well both Apple’s iOS and Google’s Android operating systems are doing, it’s almost impossible to work out just which is on the up and which is on the decline. If you throw enough figures at something then you can always make then read what you want them to. 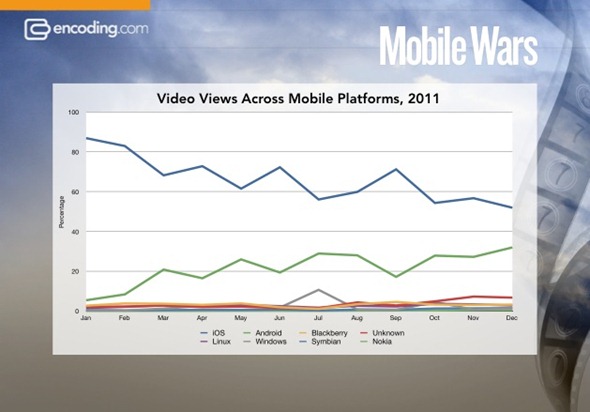 One metric that is being used is the percentage of mobile video views attributed to both iOS and Android, with Apple’s platform very much in the majority this time last year.

Now though it seems that Android has not only narrowed the gap, but has done so dramatically with the pair set to switch places should the current trends continue over the coming months.

Back in January of 2011 Apple’s iOS accounted for 87% of all mobile video views, with Google’s Android making up just 5%.

A year later and December’s figures had altered dramatically, with Android making up the ground at a considerable pace.

Now, Apple’s iOS i still top dog, but only just.

As of December 2011 Apple and iOS had 52% of mobile video views, with Google and its Android platform rising to 32%. Now matter which way you cut it, that’s an incredible change through twelve months of numbers.

Google claims to have activated over 250,000,000 Android devices to date, with that number continuing to grow at a rate of 700,000 each and every day. With numbers that large, it is entirely believable that Android will eventually overtake iOS as the platform most used for watching video content on the move.

Google’s free, open source mobile operating system currently ships on a plethora of mobile devices, ranging from smartphones to tablets and then to personal media players. With Android finding its way onto all kinds of devices from just about every hardware manufacturer, we see no reason for its huge activation figures to slow any time soon.

Whether you prefer Apple’s approach or that of Google, few can argue that the search giant’s approach to mobile software hasn’t yielded impressive results when you look at those activation figures.