Taking the prize for strangest Android story of the week, we bring news that Google’s campus is currently down one Android statue thanks to an unfortunate occurrence that can only be blamed on Mother Earth.

For those not up on how Google celebrates Android releases, the search giant likes to have a statue made that depicts the latest and greatest version of Android to be announced. There are already statues for the likes of Ice Cream Sandwich and Éclair, but the latest addition – the one for Android 4.1, Jelly Bean – is suffering from a few heat-related issues. Namely, it’s broken.

According to reports, the heat in Mountain View has caused the clear plastic head of the Android statue to act as a sort of greenhouse, slowly cooking the thing from the inside. As a result, that plastic head has begun to melt and distort to the extent that it has actually come off. Not a great look, we’re sure you’ll agree.

As if to add insult to injury, passers by have been helping themselves to the innards of the statue, namely oversized jelly beans. What the opportunists then plan to do with them, we’re not quite sure, but the snatching of the beans has led Google’s Dan Morrill to ask people to please stop lifting them. We’ll have to see whether that works, considering that the post is on Google+.

If there is one silver lining to be taken from this though, the need for running repairs to the model should give Google the opportunity to rectify an inconsistency between the statue and the real Jelly Bean logo. The logo features a green-headed android, whereas the statue’s is a clear plastic. The devil’s in the details, Google, so let’s have it right this time around OK? 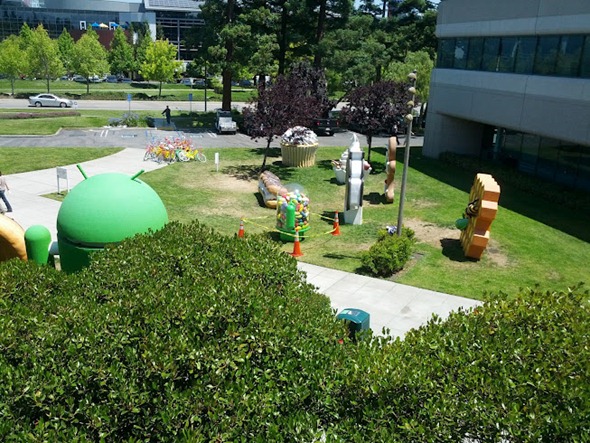 While not exactly a big deal for Google, we’re sure they would rather this hadn’t happened. Still, it keeps Android in the news at least. With Android 4.1 Jelly Bean received well according to early reviews of both the software and the new Nexus 7 tablet, it seems that Google’s mobile OS could be about to enter something of a golden age, with iOS and Windows Phone 7 potentially left to play catch-up.