Ambiscience 300 For iOS Uses The Science Of Sound To Help You Sleep, Enhance Attention / Focus, Reduce Fear And More!

Back in May, I discussed an app called Pure Meditation that came with more than two dozen audio tracks that help ease your nerves, letting you relax or focus on the task at hand.

Today, we’ve learned that the developers behind Pure Meditation have released a brand new app – adding to over a dozen* on the App Store – that uses the power of science to put you to sleep, remove fear / gear, enhance attention / focus and more! Check it out after the jump.

Named Ambiscience 300, the app comes with 300 tracks, intervals, sound loops and brainwave entrainment effects. The tracks can be listened to over speakers (proper 2.1ch speakers, of course. Your iPhone / iPad’s speakers are far too tinny to be much effective) or headphones. You can use them as an alarm tone using the built-in alarm clock feature. There’s also a countdown timer, an auto exit feature that lets you close the app automatically after a certain timer, and lastly the ability to play your music library’s tracks along with brainwave entrainment effects. 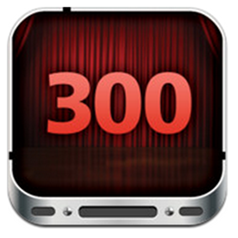 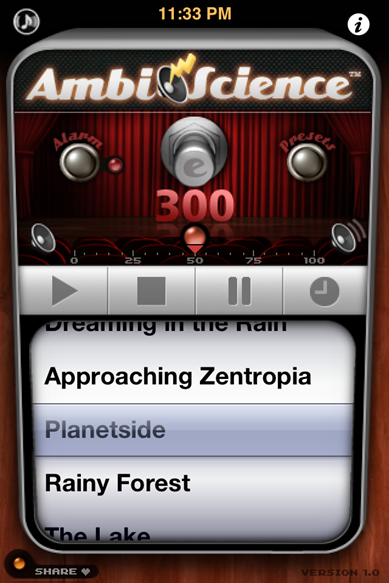 Here’s how the app works for me: put on your headphones / connect iOS device with speakers, start the app, launch one of the 50+ ambient music tracks, choose a brainwave entrainment** track based on what you want to do, and then continue with life. If all goes well, you’ll be better equipped at working on the task at hand, whether it is sleeping and maintaining attention and focus while writing a blog post like I am right now. 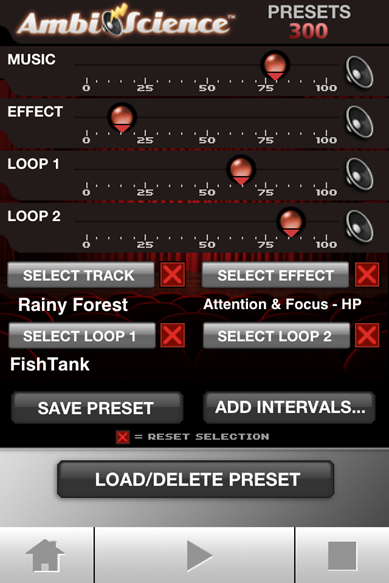 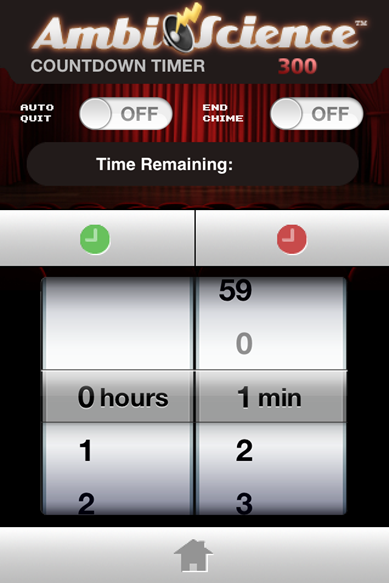 If you like you working with / sleeping to soothing music, then Ambiscience 300 is the app for you. It will come particularly handy for those of you who work or live in noisy environments. Just slip on your headphones and start 300.

I have a couple of gripes with the app, though. They are related to its user interface which isn’t as easy to use as it could be. To access entrainment effects, for example, you have to tap the e button above 300. The problem is: the look and feel of the e button, as well as buttons for accessing presets and alarm functionality is different from the Play, Stop, Pause buttons. This was a cause of confusion to me. I also felt that screen real estate could’ve been used in a better way; only three tracks are visible on the main page. Lastly, the text through most of the app is quite small and, hence, difficult to read.

But don’t let these UI issues repel you from the app. I highly recommend it because it’s genuinely useful.

Ambiscience 300 is currently priced at $0.99 as part of their introductory offer. Price will likely go up in the near future. For $0.99, you’re getting 300 awesome ambient tracks, entrainment effects and more. Buying tracks like these separately from another source would cost you a whole lot more, so this is actually going to give you a lot of bang for your buck.

Ambiscience 300 works on all iOS devices on iOS 4.2 or later.

*To make things easier for users, the folks behind this app intend to create one free app in the future that will let you buy different sound packs using in-app purchases. I look forward to that app, as the current way of having so many different apps is a tad confusing. 300 is the best value for your money, though, since it covers many of what previous apps covered.

**Brainwave entrainment tracks – or binaural beats as they more popularly known – are used by neurophysiologists to help patients reduce negative feelings such as pain, extreme mental stress, anxiety and depression.