In a move to assert some authority over Apple in the increasingly-popular e-book market, Amazon has completely revamped its Kindle Store for iPad users which looks, feels, and functions a whole lot better in a move that will undoubtedly net some undecided stragglers tempted by Apple’s iBooks.

The new web-based UI can be accessed via the iPad’s Safari browser at amazon.com/iPadKindleStore. Originally, Amazon’s Kindle iOS app linked to the older version of the Kindle Store, but in July 2011, the company was forced to remove the link in compliance with Apple’s stricter policies. Apple doesn’t allow iOS applications to sell in-app without paying a 30 percent bite. As a rival, this was not an option for Amazon, leaving an overhaul of the web store as the only feasible option. 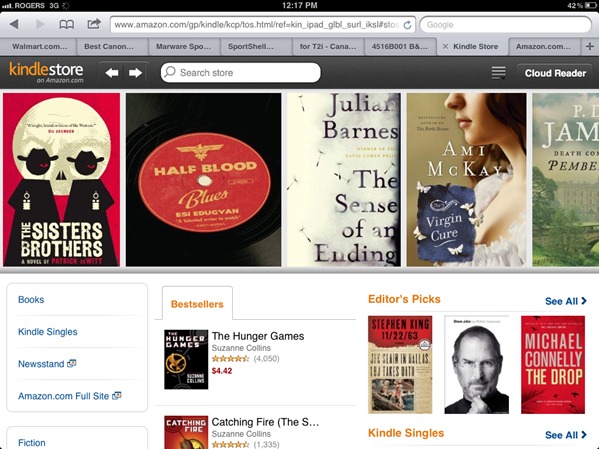 It’s smooth as butter, supporting those familiar touch gestures, and functioning as well as if it had just been plucked from the App Store. The design is nice to look at, and everything seems to fit nicely – a breath of fresh air what with the many overbearing and cluttered HTML5 web apps out there.

Despite books not being attainable directly through the Kindle app, there’s no real hassle in quickly logging in to the new Kindle Store. Indeed, a simple bookmarked icon placed alongside the Kindle app icon would seem the most logical step. Since the Kindle app is tied to a user’s Amazon account, books purchased are instantly available within the app, or the web-based Kindle Cloud Reader which can be found over at amazon.com/CloudReader.

Shortly before his untimely death, one of Steve Jobs’ three main goals for Apple moving forward was to revolutionize the way society watched television, photographed, and read textbooks. Apparently, Apple is to announce an attack on the latter of those three in an iBooks-focused media event detailing plans for publishing and educational content. It is thought in anticipation, Amazon took this calm before the storm period to slip its improved web app in.

The web re-think packs in quite a few features including search, detailed descriptions, categories, quick links as well as the world-famous reviews. If you’re a bookworm using an iPad, you just have to check it out.