Earlier today, Adobe released an updated version of Flash Player 11 on the Android Market dubbed as Flash Player 11.1. Besides the usual improvements in performance and bug fixes, this version brings support for devices powered by Android 4.x Ice Cream Sandwich. Details and download link after the jump!

The news comes from The Verge – a blog dedicated to covering consumer electronics and the technology that powers them – in the form of a short post in which they discuss the update.

Adobe made it official on November 9th: their multimedia platform Adobe Flash – which is used to add interactivity, animation and audio/video to webpages – would not be developed further for new devices and updated mobile operating systems*. This, at the time, meant Android 2.3 Gingerbread would be the last Android OS with a Flash-supported browser.

Two weeks later, though, Adobe announced that they would actually be updating Adobe Flash Player to support a new mobile device plus updated mobile OS – Android 4.x Ice Cream Sandwich – one last time before giving up on it.

This update to Adobe Flash Player 11 includes compatibility with Android 4 supported devices, performance improvements and bug fixes related to security and stability. The complete set of release notes can be found at: http://adobe.ly/s16mAX.

If you’ve got yourself a Galaxy Nexus after it (finally) released yesterday on Verizon, you may want to install it. While most internet websites now support HTML5 video, you will certainly come across a website or two that only plays Flash-based video. That’s when you will want to have Flash Player 11 installed on your device. 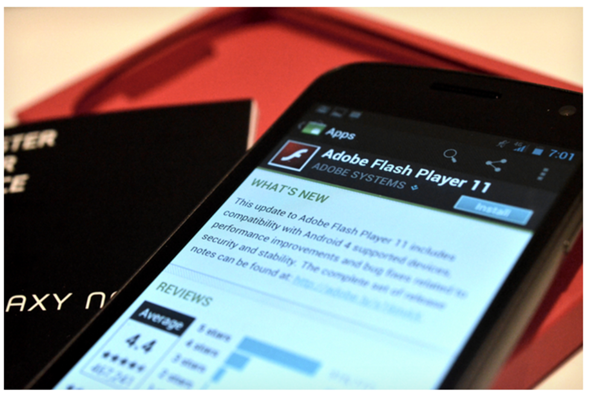 What are your thoughts on Flash on mobile devices? Is it a nuisance that should be eliminated and not supported at all (like Steve Jobs said)? Or is it something you see as a plus for Android? Sound off in the comments section over on our Facebook page!

*Performance improvements and bug fixes related security and stability will, of course, be sent out whenever necessary. Flash is not very secure, so Adobe has to update it pretty regularly, and they’ll keep doing that for a while.