We’ve all been there – half way through a bedroom ballad, wailing happily into the hairbrush, and suddenly, forget the lyrics.

Ok, so maybe that’s just me. But still, it can be a pain when lyrics are forgotten, and it’s certainly annoying when others loudly and proudly bellow the wrong lyrics, especially when they maintain they were ‘sung’ correctly.

Although there are jailbreak tweaks which allow song lyrics to be viewed on iOS devices (if you download your music illegally, you’ll see them half the time anyway so I hear), SwitcherLyrics, developed by the apparent jack-of-all-trades DJKira, takes a rather different approach to the general lockscreen-or-nothing lyrical display.

If you’re a dab hand with iOS jargon, you’ll have probably surmised that this particular tweak displays the lyrics in the app/multitasking switcher initiated by the sharp double-tap of the Home button. Despite there actually not being a helluva lot of room down there, it still manages to present lyrics in a slick, readable and functional sense. Well, at least most of the time.

I say most of the time since, if you’re a little more ‘out there’ and listen to artists many would consider obscure, then your lyrics will not be found. Fair enough, you would think. Except, if the tweak searches for lyrics and finds nothing in the cupboard, well, it simply does not compute, leaving your device in a state of frozen uselessness remedied only by a soft reset. 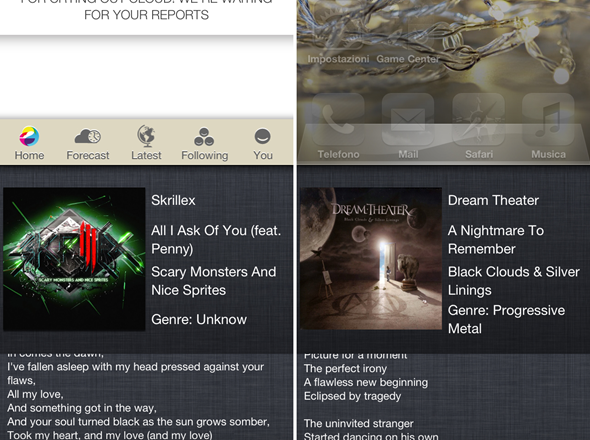 For $0.99, some may not consider it worthwhile, especially with the added hassle of the freezes and whatnot. From an outsider’s point of view, the developer would have been better off releasing it as a free beta, getting some decent feedback, and ironing out the bugs before charging hard earned dollars. Those paying for Cydia apps (an unfortunate minority), will probably steer well clear of this app after experiencing the significant bugs – despite its overt promise.

If you want to give it a blast, it’s available over at the ModMyi repository, which will reside in your default source list unless you have, for some reason, removed it.