iOS 5 brought native Twitter integration to the iPhone, iPad and iPod touch, and this was followed up nicely with a deal to bring a similar offering to iOS 6 with Facebook. But while this deep affiliation has done wonders for seamless sharing of various content, the Notes app is missing this ability to share a note via Facebook or The Twitters. Thanks to a nifty little tweak called ShareNotes, this restriction needn’t stop you sharing your notes with your followers and friends, and although Twitter’s 140 character restriction will also apply to your notes as well, at least you won’t have to be cutting and pasting anymore.

To be frank, iOS is still, even now, full of these kinds of anomalies and inconsistencies. The share button in the Camera Roll presents us with all kinds of options, and although some of these wouldn’t directly apply to notes (the "Use as Wallpaper" option, for example), it’s a bit of a mystery as to why there’s no option within Notes to send a note as a Facebook message or tweet.

It might just have been that, what with the character limit, Apple thought it would be a bit difficult to work and not a particularly worthwhile venture. Whilst I can see this point of view, a selector tool specifically asking the user to pull out a 140> chunk of a note doesn’t seem as though it would have been too much of a stretch to implement, and would have subtly enhanced the functionality of a Notes app that does look increasingly dated.

The fact remains, though, that aside from copying and pasting, there’s no efficient way to spread your insightful musings to the rest of the world, but if you are indeed jailbroken, ShareNotes fills in this little "missing" feature. 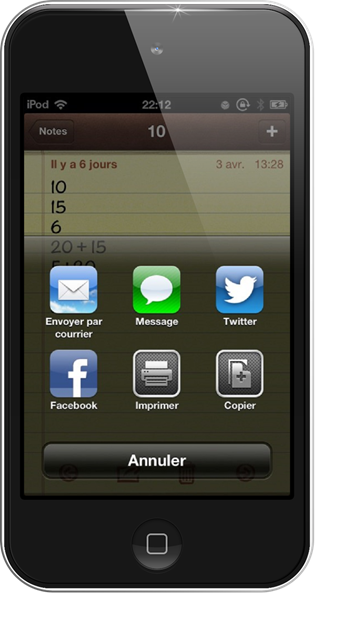 It’s available over at the BigBoss repository (a default within Cydia under ‘Sources’), and is absolutely free of charge. Not only is it a very small file to install, but it doesn’t even require a respring, so tap on that Cydia button and afford your iOS device just a little more functionality.