Access iCloud Bookmarks On iPhone The Easy Way With ‘CloudTabs+’

There’s been a lot of chatter in the dev community over the last few weeks regarding the complexities which iOS developers face in integrating iCloud sync functionality into third-party apps. A lot of big name dev studios have controversially taken the decision to shy away from adding iCloud sync in their apps and games, with the general consensus being that the iCloud APIs are overly complex and are nothing short of black magic. Still, it seems that we can always rely on Cydia to pump out some iCloud based goodness for those iPhone, iPad and iPod touch users who have the luxury of being jailbroken.

CloudTabs+ is one of the latest packages to land on the BigBoss servers and comes courtesy of Kaushal Trivedi. Although the tweak doesn’t specifically add any additional support for synchronization or use iCloud is some innovative and genius way, it does introduce a simple long tap gesture within Mobile Safari that is surely going to be extremely useful for those people who allow iCloud to handle their browser sessions on all iOS and OS X devices in their possession.

The concept of CloudTabs+ is fairly simple and easy to understand. iOS 5 and iOS 6 allows users to enable iCloud integration on the device through their Apple ID. One benefit of this is being able to synchronize open browser sessions with iOS and OS X devices. If Safari is running on the MacBook Pro in the living room with the correct iCloud permissions granted, then it is accessible from the iOS device as well. CloudTabs+ allows all of those iCloud based Safari sessions to be easily accessible through a long tap of the Bookmarks button in the toolbar of Mobile Safari. 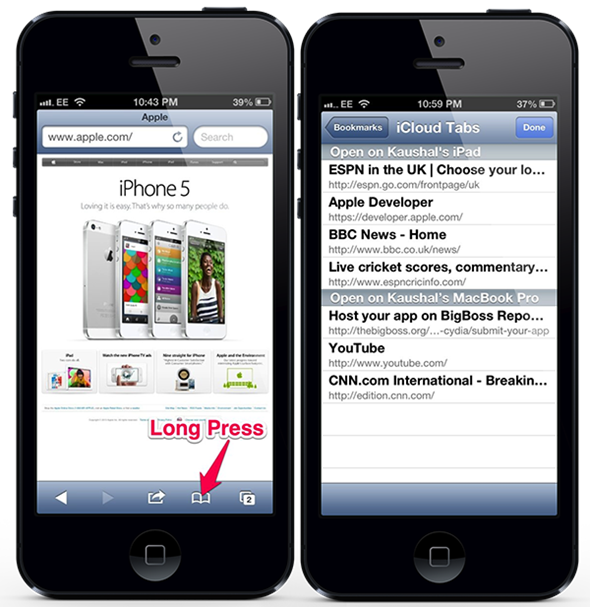 There are no additional options to configure when the package is installed, meaning that it is as easy as downloading, opening Safari, tapping on Bookmarks and sitting in wonder as all available sessions are shown in a tabeled list with the corresponding device shown alongside. Third-party developers may have difficulty getting to grips with iCloud in their apps, but at least jailbroken users now have native integration and CloudTabs+ to get their teeth into.

CloudTabs+ is available as a $0.99 download from the BigBoss repository and requires a jailbroken device running iOS 5.0 or above.