Widgets may not be as commonplace on iOS as they are on Android, but the jailbreak scene has presented us with a great deal more in terms of options than we’d otherwise have at stock level. MusicWidget is a very simple, clean, and aesthetically in-keeping widget for music fans which presents you with album art, song title, and artist when you double-tap the Music app icon on your home screen. Said information reveals itself in the same way a folder does when opened, while the icon is in turn minimized to place further focus on the widget itself.

It doesn’t actually do a great deal aside from offering your basic skip, play and pause controls, but it does look very native, and while some tweaks, intentionally or otherwise, don’t look as though they were ever meant to grace iOS, MusicWidget is not one of them. Since this widget appears to be based very heavily on the behavior of iOS folders, it doesn’t look as though this tweak will work if your Music app is placed within a folder. We tried the double-tap activation method twice from within a folder, and discovered that on both occasions, the device crashed and booted back into safe mode.

Still, it doesn’t really make sense to hide your icon away if you want to make the most out of the widget, since it’s meant to be an easy way for you to quickly find out what you’re listening to, skip a track, or check out the cover art of a song or album. Besides, placing the widget within a folder only adds an extra step, by which time, you could have just opened up the Music app and found out all of the information from there.

The developer has stated that MusicWidget will only work for the iPhone or iPod touch, and does require iOS 6.0 or higher in order to function. 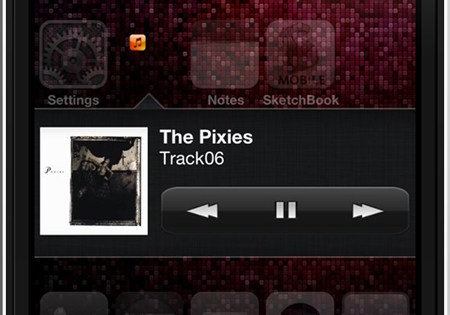 If you’re constantly shuffling through your songs, and would like to add a little finesse to the whole process, MusicWidget offers this in spades. It’s absolutely free over at the BigBoss repo, so download it, and let us know what you think of it by leaving a comment below.