The smartphone market is among the largest and fastest growing markets in the world of consumer electronics. It is currently dominated by the iPhone and Android smartphones, with BlackBerry and Windows Phone at a distant 3rd and 4th position.

Now that Apple has released the iPhone 5, arguably the biggest smartphone of the year with 5 million units sold in the opening weekend, it’s time to take a look at the smartphone market and, more importantly, involved consumers. 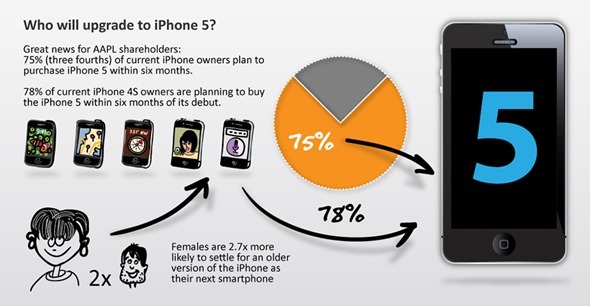 600 adult Americans were surveyed for the infographic. This may seem like too small a number considering the size of the smartphone market, but it is enough to get an idea of where things are going.

According to the infographic, 40% people own an Android smartphone, 23% use an iPhone, 5% are still using an outdated BlackBerry device and 3% are on Windows Phone. This reflects the data published by other market research firms.

Those of us who felt that the iPhone 5 will not sell too well because of its similarity in external design and overall user-experience to iPhone 4S will be surprised to know that 75% of current iPhone owners and 78% of iPhone 4S owners plan to buy an iPhone 5 within six months.

One last figure I’d like to mention is related to the popular iPhone 4: it appears that the number of iPhone 4 users far exceeds any other iPhone with a 50%+ share.

The infographic, which you can see below, has plenty of other interesting facts and figures that you should definitely check out for yourself: