Apple’s iPhone SE may only be in its infancy in terms of how long its actually been an “official” product, but it’s already been subjected to a number of horrendous tests designed to test the manufacturing and engineering quality of the hardware. Now, Apple’s new 4-inch device is once again being brutalized in front of the camera, this time involving a hammer and a knife scratch test to see how well the hardware stands up to these two objects intent on utter destruction of the phone.

The video starts out innocently enough with an overview of the new iPhone SE packaging, before using the now infamous knife to break through the cellophane wrapping in order to gain access into the box. Once the iPhone is free from the packaging, it still seems relatively innocent and more like an unboxing review of the device as it’s switched on and flipped around to give us a view of the beautiful Rose Gold exterior and the underlying iOS platform. That’s when the knife comes into play with the Retina display and rear of the phone being jabbed and scratched consistently with the sharp kitchen tool. 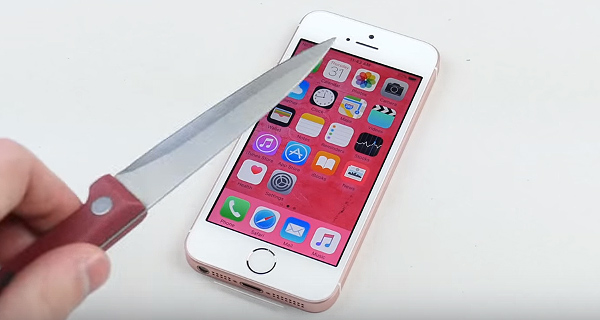 After a number of jabs to the front and rear of the phone, the video creator instantly moves on to trying to penetrate the camera module with the sharp, pointy end of the knife, obviously trying to see just how well the device is built and if there are any gaps or slight imperfections in how the module sits within the casing of the iPhone. Then comes the blunt force trauma which instantly cracks the glass shell of the camera module and starts to put some visible marks on the lining of the device. A little extra force and the knife easily breaks through the glass camera.

Some individuals may believe that subjecting a new iPhone SE to a destructive knife would be enough punishment for the device. They’d apparently be wrong. Out comes an orange and black mallet/hammer that is repeatedly dropped from a small height onto the display of the iPhone. Initially, the phone survives the drops but when more force is applied, it results in complete destruction of the device.

Check out the destruction for yourself and see what you think. Will you be getting your new iPhone SE home with the sole intention of smashing it to bits with a hammer?