If we thought that we knew exactly what the 2019 iPhone lineup would be, it appears we may have been incorrect after a new report was made public by Macotakara.

The Japanese site claims that insiders have tipped that Apple will launch two new OLED iPhones this year, rather than simply build on the previous iPhone XR, iPhone XS, and iPhone XS Max combination.

According to the report, the reason for the two whole new phones is the inclusion of the triple camera setup the has been rumored of late. Those new cameras will apparently need a larger iPhone body due to the increased size of the sensors involved. Because of that, OLED will be used to help with the overall thickness of the iPhones with thinner bezels also likely thanks to the move to the new technology.

The report suggests that the two new models will come in 6.1-inch and 6.5-inch configurations with the latter being 0.15mm thicker overall than the iPhone XS with a 0.5mm reduction in the camera’s protrusion. As for the 6.5-inch model, it will apparently be 0.2mm thicker than the iPhone XS Max, with a camera bump that is 0.25mm smaller.

Also of note is the claim that both of the new iPhones will ship with bi-directional wireless charging as well as an 18w USB-C charger in the box. That will mean that a USB-C to Lightning cable will also be included. 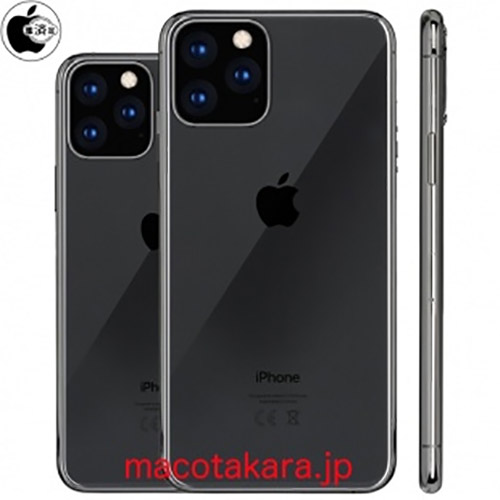 All of this does make these phones sound like a premium option, which will be a concern for those worried about spiraling flagship iPhone pricing. Interestingly though, a few days back, @OnLeaks had come out informing us that there’s a good possibility that the triple-lens camera setup may not be exclusive to any iPhone/s in particular for 2019. So could this mean that a new iPhone XR will be packing a similar camera? Logic possibly dictates no, but let’s see.

As for the increased phone dimensions, this being Macotakara, the report is as likely to be accurate as it is to be inaccurate, so we’ll see how things pan out in coming weeks and months before making a judgment here.