The introduction of the Retina-ready MacBook Pro was a fantastic achievement for Apple and represented a huge step forward for the Mac line of computers as Apple continue to develop both the hardware and software of their increasingly popular notebooks. The company is rightly proud of what they have achieved with the initial release of the MacBook Pro with Retina display, and pride themselves on being the first to market a notebook that features a display with 5.1 million pixels and a monstrous 2880 x 1800 screen resolution.

There’s no denying that the 15.4-inch MacBook Pro with Retina display is an amazing feat of engineering, and by far the most advanced Mac which Apple has ever produced, but unfortunately, due to the size and the cost of the notebook itself, a lot of people who would love to have their computing experience enhanced by Retina goodness are unable to make the purchase. Even though the shell of the MacBook Pro has been redesigned and is lighter, a 15.4-inch model is just to large for a lot of notebook users. If you fall into the category of wanting a MacBook with a Retina display, but need something more portable, then you could be in for some good news as the old 13-inch rumors are starting to emerge again.

Almost immediately after the initial launch, we began to see rumors circulating that Apple would also extend the line and introduce a smaller 13-inch version of the Retina display MacBook Pro and thanks to a new set of benchmarks which appeared yesterday. This speculation seems to be gaining more traction. It wasn’t that long ago when we started seeing reports showing the existence of a MacBookPro 10,2 model, which was backed up by benchmarks on GeekBench’s database, prompting the initial conjecture that Apple is working on and planning to release a smaller version of their Retina display MacBook Pro due to the the current 15-inch version carrying the MacBookPro 10,1 moniker. 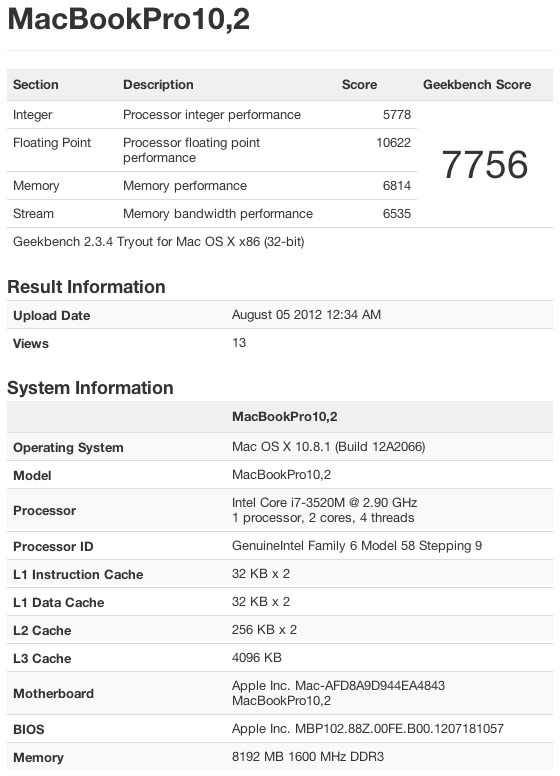 An additional entry carrying the same name has now appeared in the same database with the data specifications being extremely consistent with the original entry. The entry into GeekBench suggests that the purported 13-inch MacBook Pro is running a 2.9GHz Core i7 processor, which is the exact same powerhouse that currently powers the existing MacBook of the same size. The machine that has been tested in the second instance is also carrying a whopping 8GB of RAM and produced a GeekBench score around the 7800 mark. There is no guarantee that this is actually Apple testing out a new Retina model, as we have seen instances in the past of entries in this database being faked, but if it is genuine, then I have my credit card waiting.