Despite having seen a deluge of new smartphones arrive to market in the past couple of months alone, we’re always on the lookout for a new gadget to drool over, and if you thought the Galaxy Note II – with its 5.5-inch display – offered an incredible amount of real-estate to play around with, wait until you get a load of what Chinese company ZTE is cooking up.

China has a bit of a reputation for its illicit bootleg market, where nearly every popular device is faked several times over and sold at a fraction of the price of the real deal. While those companies are still in the overwhelming majority, there are still plenty of legitimate companies looking to make their own stamp on the mobile industry.

ZTE is one of those companies, and in the wake of the launch of Windows Phone 8 last week, ZTE’s head of market strategy, Lu Qian Hao, has released a teaser photo via Weibo – the Chinese equivalent of Twitter. Windows Phone 8 has generated quite a bit of hype, and with AT&T offering the Lumia 920 and 820 as of later this week, those looking to hop aboard Microsoft’s fledgling ecosystem might want to pause and take a look at these intriguing models from ZTE.

Whenever a boundary is pushed by one company in the tech sphere, it doesn’t take the others long to latch on, and while a 5-inch+ diameter for a smartphone screen may have seemed unthinkable prior to the original Samsung Galaxy Note, ZTE is literally pushing the boat out by offering a mind-boggling 5.9-inch display. 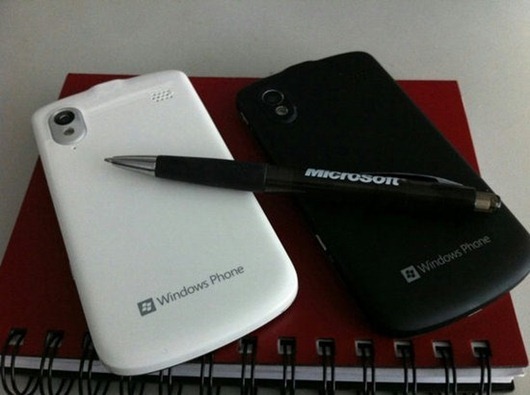 The devices, which are depicted in both black and white color variants, both look aesthetically-sound, and although we’re not treated to a look at the front of either models, it’s fair to say we’ll be looking at a near edge-to-edge display. Not only will the screen be sizable, but the quality is also said to match, with a 1080p resolution full HD display offering sharp visuals to match the significant surface area.

Obviously, the 1080p claim will have to be seen to be believed, as Windows Phone 8 doesn’t support higher than 720p. With that said, the Windows Phone 8 kernel is said to be capable of handling 1080p with a few adjustments, so we’ll certainly be keeping an eye out for any further developments on this handset.