Google’s Maps is by far the navigation utility of choice not only on the company’s very own Android platform, but also iOS, where millions of iPhone, iPad and iPod touch users have downloaded the search giant’s third-party offering from the App Store. Why do we all love Google Maps so much? Well, besides being one of the most accurate and feature-rich experiences in the field, it is also incredibly easy to use, and the swiping, tapping and pinching gestures make the whole process pretty seamless. Thanks to mobile device enthusiast Carl Sednaoui, we’ve got a little video demonstration of a feature many of you may have missed within Google Maps, which allows users to zoom in and out effectively using a little-known one-handed shortcut.

Most of us use Google Maps everyday, and although zooming using the pinch gesture is effective and easy enough to do, it’s not very practical for those with smaller / less nimble hands. This is because using the pinch normally requires the device to be held with the other hand, but thanks to Sednaoui’s very useful share, it’s actually fairly easy to zoom in and out using just your thumb. 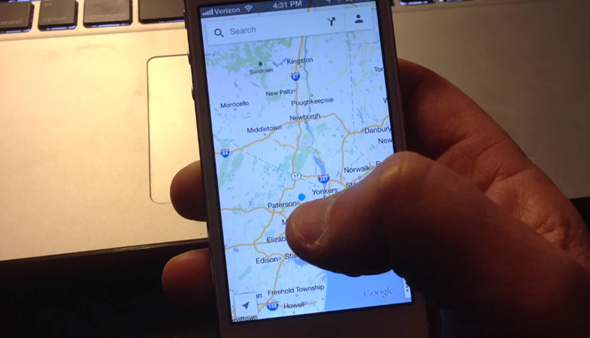 I, like many, have mastered the art of zooming with one hand using the pinch gesture, but having used Google Maps since the introduction of the original iPhone, I’ve had a lot of practice. But devices have got a helluva lot bigger since 2007, and with many consumers now holding their smartphones in both palms when interacting with it, it’s perhaps even more crucial that we afford at least one hand a little break wherever necessary.

The tip involves using a single tap, then lifting your finger off the screen, followed sharply by a downward gesture on the display to zoom out, and single tap with an upward gesture to zoom in. It sounds incredibly simple, but despite hundreds of millions of smartphone users running Google’s mapping software, it’s something the majority of us seem to have missed:

It works just fine for both Android and iOS versions of the app, so from now on, when you’re wandering around trying to find out exactly where that big meeting or event is being held, you won’t need to use both hands in order to zoom in or out of the map.