Looks like Apple Watch bands have begun arriving at Apple Stores in the United States, United Kingdom and possibly other launch countries as well and are available for sale as standalone units. More details and specifics can be found right here.

The development unfolds in wake of a report surfacing yesterday, suggesting that the Cupertino camp may be looking to throw in separate standalone Apple Watch bands on the shelves of its retail stores in launch countries. A day later, we have MacRumors confirming that the separate Watch bands are in fact now available at Apple Stores, after Twitter user Apple Radar tweeted a photo of Sport band boxes stocked on shelves in an Apple Store in Miami. The bands are available in a variety of colors as the photo shows, and should be available in other stores in the launch countries as well, as was confirmed by multiple users on social media.

The report that hinted at the arrival of watch bands in retail stores had also talked about Apple prioritizing to cater the needs of Apple Watch customers who are looking to swap their existing band with another one, and to allow employees to switch out some of the display units’ worn out bands, with separate sales of the bands pending till those needs are met.

However, with the only photo that there is for now, it is the Sport band that is seemingly up for sale. While it’s apparent that Apple is indeed selling this stock as a standalone product for Apple Watch owners wishing to grab an extra band or two for their device, there’s no word of walk-in band switching for existing users. According to Apple Radar, the Classic Buckle is also available at the Miami based Apple Store. 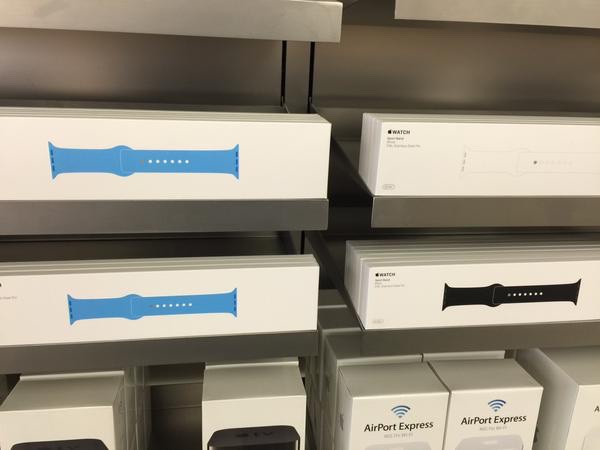 Along with the Apple Watch, the bands were also available in limited quantity despite being exclusive to online ordering, though the Sport band shipping times are comparatively much lower than the rest of the choices.

Looks like band production has been ramped up now, as Apple continues to sell the Sport band for $49, and the Classic Buckle, Milanese Loop and Leather Loop, for $149 apiece. While the Modern Buckle comes in at $249, the stainless-steel Link Bracelet retails for $449.