There have been signs over the past few months that an Instagram Web service was drawing ever closer to completion. For a while now, it has been possible for Instagrammers to check photos and view profiles through an ordinary browser, but as of today, the beloved Feed – which serves an almost identical purpose to the News Feed of Facebook, it’s now-owner – has now also been unleashed online.

Whereas some of our veteran social networks – such as Facebook – started out on the Web and have gradually trickled services out across a variety of mobile devices (with several bug-riddled versions in the process), entire networks can now comprise of a mere app. Just because trends suggest mobile users are now the majority when it comes to checking in and mingling with other sociable folk online, however, that doesn’t mean consumers haven’t requested app-only networks like Instagram offer a Web alternative.

In fact, Instagram users have wanted a Web version pretty much since day one, and it looks as though that calling has almost been answered. Although the taking and editing of shots (if you can call it editing) will nearly always be more convenient on a mobile device, the art of viewing is restricted by the comparatively smaller screen of the smartphone.

With the Instagram Feed now available as part of the Web package, the ‘port’ of the app version is almost complete, bringing likes and comments to the millions of Instagram users out there. All that remains now, is the ability to upload photos, and although this will be good for the folks who love to take 100 shots of the same thing and upload en masse to Facebook, it’s not something, one suspects, people will be anxious to see. 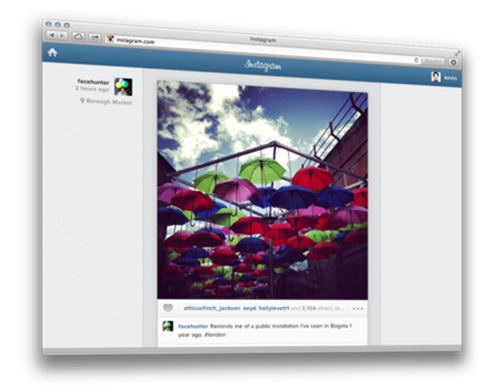 One thing which may have users pondering, however, is how soon, and how obtrusive advertisements will be when they inevitably make their appearance on Instagram. The inclusion of ads was a foregone conclusion right from the point when Facebook paid a billion bucks for Instagram, and although the company’s ad system hasn’t stopped its main network growing to the current 1.06 billion active users, users won’t be thrilled by their presence.

Facebook has a good reputation for sneaking in ads without provoking knee-jerk reactions and threats to quit from users. Policy changes late last year in Instagram did threaten to light the blue touch paper, but so long as Instagram remains – from a public point of view – separate from its corporate associate, it should continue to prosper.