Xbox One Update With New UI And Cortana Detailed, Here’s What It Looks Like

As Microsoft’s annual E3 conference hurtles toward an end, the software giant has announced a number of delectable details pertaining to the user experience on its Xbox One Dashboard. Like all updates that have come before it, the system refresh will be offered as a free-of-charge download to users and will take place via the usual System Update facility. Gamers can expect an improved user-experience that takes the existing positive notes of the Xbox One platform and mixes it with the best parts of the upcoming Windows 10 operating system.

By integrating the fundamentals of Windows 10 and optimizing the experience for the gaming platform, Microsoft aims to deliver an improved user-experience that will include connecting to remote services a lot faster, such as multiplayer gaming sessions. The addition should also ensure that the most accessed content will be available rapidly giving the users exactly what they want and when they want. And of course, integration of Windows 10 will also mean the availability of Cortana as a personal gaming assistant on the gaming console.

As well as making significant changes under the hood, Microsoft will also give the Dashboard a visual overhaul. The Xbox One home screen has been redesigned to serve up the most relevant content to the currently signed in user. Vertical scrolling will allow additional information to be presented pertaining to recently played games including rich content relating to those titles. Of course, no redesign would be complete without Microsoft offering up the opportunity to actually discover new and fresh content, thus in effect maximizing revenue opportunities through a fresh design.

Microsoft has also responded to what they call “passion from the community” relating to Xbox avatars. It seems that the internal powers at the software company do indeed listen to user feedback and has made the decision to bring Xbox Avatars back in a prominent way with this new update. All avatars will benefit from a modern overhaul and will utilize higher-resolution visuals to really compliment the system that will honor the customization capabilities which used to be present on Xbox 360.

Like mentioned earlier, Cortana is coming to Xbox One as well. According to Microsoft, Cortana will help gamers “elevate their game”, and promises to “get smarter over time”.

The new update will be available to those enrolled in the preview program starting next week. And a mass consumer rollout is expected to take place this fall. 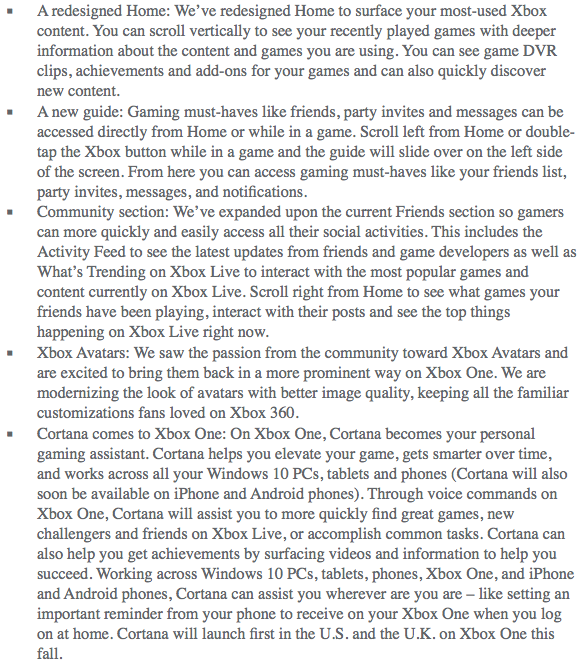