It’s a well known fact that Europeans love their football, or soccer, as it known in some parts of the world, and as a sweetener, Microsoft is throwing in a free copy of FIFA 14 with every Xbox One pre-order. The move, which is an overt attempt to pull in consumers tempted by the PlayStation 4, was announced by the Redmond company at the Gamescom trade show in Germany, and will be available to all pre-orderers while stocks last.

There’s no indication of what kind of bribe Microsoft will be throwing the way of the North American market, but it’s clear that the software maker is doing its level best to gain an early edge on its Japanese rival. The Xbox might have edged the current-gen console wars, but that in no way suggests that repeating that feat will be a formality. It’s a well known fact, for example, that the Xbox One will be decidedly more expensive than the PlayStation 4, and while owners of the former will see the second-gen version of the Kinect sensor out of the box, it’s fair to say that a large fraction of the early-adopting, hardcore gaming faithful could be more swayed by the cheaper option than the potential for interactive gaming.

Here in the UK, FIFA is a bit of an institution amongst football fans, so Microsoft’s decision to offer the latest version for free would seem a well informed one.

Throwing in the game as standard will certainly help the Xbox One’s cause versus the PlayStation 4, and will also tempt those otherwise put-off by the console’s high price point. One of the cited reasons for the PlayStation 3’s slow adoption was its sky-high cost at launch, and although the Xbox One undeniably offers more bang for that buck, it will be very intriguing to see whether a free game and the second coming of Kinect will be enough to see off the PS4. 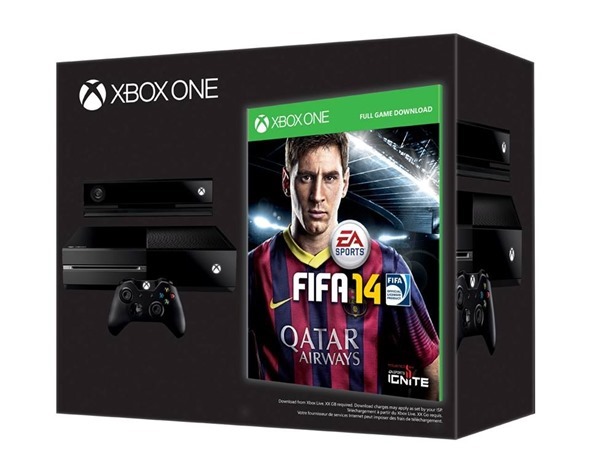 Microsoft has been working particularly hard to bring gamers back onside after a period of ambiguity regarding always-on Kinect and used games, and although the Xbox One looks a more appealing prospect now than it did a month or two ago, plenty will still need convincing before putting their hard-earned money down.