Here at Redmond Pie HQ, we place a great deal of value on working hard and getting the job done. We would never condone frivolously boycotting your responsibilities and commitments in favor of pursuing some other kind of more interesting leisure activity. However, we do make a few exceptions to that rule, one of which is that it’s actually alright if the leisure activity involves spending some extremely important alone time with the Xbox One and Xbox LIVE. We can’t get you out of work or family commitments, but thankfully the Xbox Doctor’s Note service has you well and truly covered.

Microsoft is currently involved in the process of finalizing plans ahead of this evening’s big midnight launch. Unlike Sony and the PlayStation 4, the Xbox One will be released into a plethora of excited markets at the stroke of midnight. This multiple market released plan is great for consumers (unless you live in Australia or New Zealand), but the fact that the console is hitting shelves on a Friday means that a fair few will likely have to wait until after work, school or college to get to grips with the One. That problem can be solved with a randomly wonderful Doctor’s Note courtesy of Xbox. 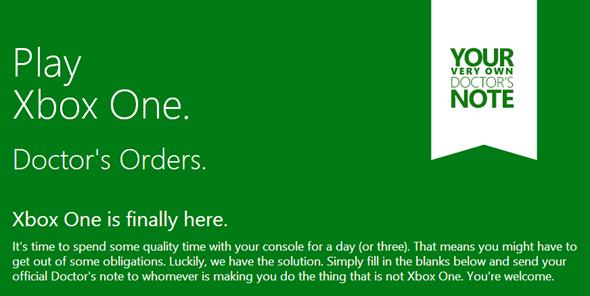 As you might imagine, Microsoft and the Xbox team want as many of us as possible to spend some quality time with the new Xbox One hardware. That could be playing games locally, interacting with media content or hammering Xbox LIVE servers for some multiplayer gameplay. In order to help us excuse ourselves from our obligations, the team has come up with a handy little certificate that claims the "Xbox One can help relieve the patient’s entertainment deprivation and will have an increased state of happiness at all times".

Those wanting to use the Xbox note can select from a rare list of ailments including Xbox Fever, Zombie Flu, Soccer Reflux and Irritable Battle Syndrome. In order to resolve the ailment and restore balance, the Xbox doctor is happy to tell your employer that you need to fight the bad guys, slay zombies, save Rome at any cost, get sweaty and even solve a mystery to get back to full fitness. Just as a word of warning, it may be prudent to not actually hand this in to your place of work or you might find yourself with more time to play Xbox than you initially bargained for.