The world we live in is a hugely cultural diverse place with it becoming increasingly more and more common that people do business and communicate with individuals all over the world. With social networks playing such a huge role in our online lives, it is not uncommon to find ourselves communicating with people on a daily basis who live on the other side of the world. I know from first hand experience that there is nothing more infuriating than sending someone an important email and not getting a response from hours because it is the middle of the night where they live and they are more than likely sleeping.

I also know that some people are actually totally ignorant to the fact that time zones exist and still can’t get their heads around the fact that just because it is midday in the United Kingdom, it doesn’t mean that it is midday in Australia or the United States. So how do we go about solving this problem and getting quick access to world time zones and local times in a number of countries or cities? Well, one option is the default Clock application on the iPhone which allows users to set a number of world clocks for any country they wish. But if I want quick access to this information, am I truly expected to head on over to my utilities folder, open it and then select clock and then select the world clock tab? That seems like an awful lot of effort to me, so thankfully the jailbreak community has been at it again.

WorldClockCenter is a plug-in which hooks directly into the Notification Center found in iOS only devices and gives quick, one swipe access to the world clocks which has been set through the default Clock application. Notification Center is invoked as usual with a simple pull down gesture from the status bar, and there in all of their international glory will be the clocks that have been predefined through the native application. 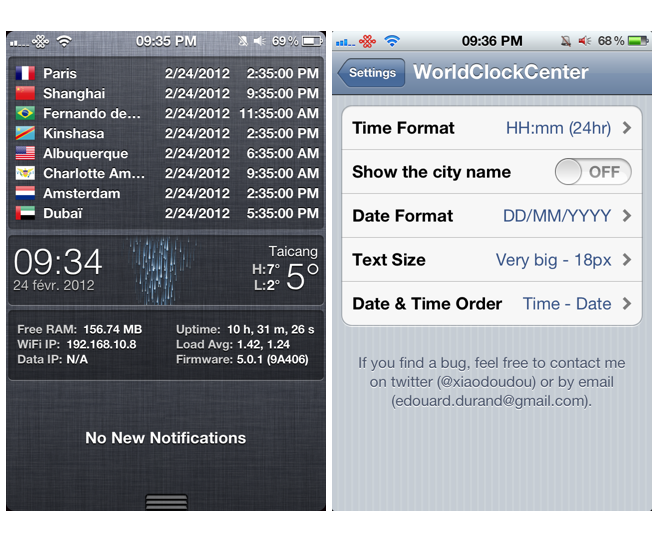 WorldClockCenter is a fairly simplistic tweak in appearance in that it provides all of the information in a list format, detailing the flag of the chosen country as well as the current time and date. Post installation, the settings application is also altered to include a preferences panel for this tweak which gives the user the power to set the desired time and date format as well as the text size and order in which the information is displayed. Users can also decided whether or not they want to display the city name or if the country flag is enough to remind them.

This tweak could prove to be very useful for a number of people, and may certainly prove to be valuable to those who deal with friends or business partners from around the world on a regular basis. It is also in its fifth update which goes some way to prove that the developer is providing constant improvements and support for the tweak which is always a good sign. However, the cost of $1.99 might be off putting to some considering the information can be obtained relatively quickly from the default clock application.

WorldClockCenter is available at a cost of $1.99 for iPhone and iPod touch from the BigBoss repository.