Neowin has received information that Microsoft is set to launch a wide range of Windows Phone 7 devices on October 21 in UK, France, Germany, Italy and Spain (US 21st Oct release date is not confirmed yet).

This is in line with expectations of an October release. Launch events will be held in major cities from around the world to commemorate the launch. Neowin also states that an open-house event will be held in New York on October 11 where Microsoft will show some of the newest devices. (Maybe we’ll finally see an official HTC HD7 announcement!)

With Windows Phone 7’s launch date inching nearer and nearer day by day, the time has come for Microsoft to start making use of its $400 million advertising budget for their all-new overhauled mobile operating system! 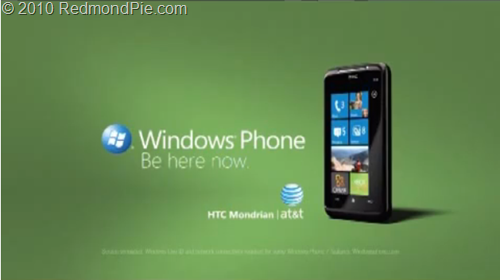 From what information we have, the ads embedded below were leaked from Microsoft. Original ads were pulled down but WMPoweruser managed to download a copy of the ads and uploaded them from their own account. See them in all their glory below!

At the end of both ads, you can see the HTC Mondrian. It is a WP7-based smartphone and from what we can tell, it will have a 1GHz processor, 512MB of RAM, a 5MP camera w/ flash, 8GB flash memory, WiFi, Bluetooth and the other standard WP7 specs. Screen size is not confirmed at the moment, but it should be 3.7” since HTC will keep the 4.3” spot for HTC HD7.