With just days left ahead of Microsoft’s promised release window for Windows 8 RTM*, the company is going through the very final steps of the software development cycle – involving things like checks and verifications. We’ve received news from TheVerge that the final build of Windows 8 will be 9200.16384.WIN8_RTM.120725-1247 (or just 9200) and not 8888 as it was previously being reported. TheVerge cites their own sources as well as Win8China for the story.

Just five days ago, WinUnleaked released more leaked screenshots of the RTM build of Windows 8 which showed new wallpapers, lack of Aero Glass, UI changes in Internet Explorer 10 and an all new, very minimal boot screen. Win8China has released two cool new wallpapers from Windows 8 RTM which will act as default for the lock screen and the desktop.

Apart from the lock screen wallpaper, Techit also revealed the official Windows 8 wallpaper and is now up for grabs.

Unlike Windows 7, the default wallpapers lack any sort of Windows branding which is a surprisingly pleasant change, and we welcome it fully.

Windows 8 will be released to OEMs in the first week of August so they can do testing and install their own bloatware before putting the OS on retail laptops and desktops. Those of you who are subscribed to TechNet or MSDN should be able to get access to Windows RTM in about the same timeframe, but Microsoft is yet to confirm this.

In any case, Windows 8 public release is all set for October 26th, and I’m quite certain that every geek is looking forward to its release. Will it be as big a success over Windows 7? Or is Windows 8 with its radically different approach to desktop computing going to be Windows Vista 2**? Only time will tell. 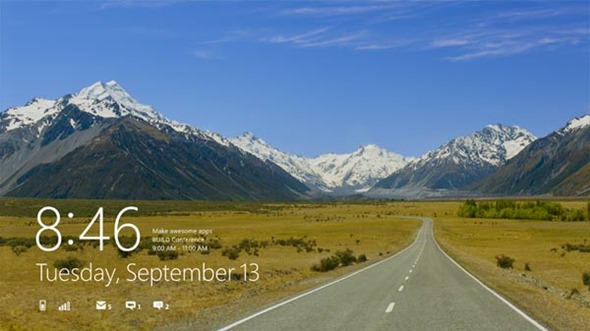 While Windows 8 looks like a really enticing upgrade, I intend to stick to Windows 7 until the bugs and quirks that accompany the new OS get ironed out by Microsoft themselves. That may take over a month or a year depending on how the community reacts to it.

For more information on how you can upgrade to Windows 8 from XP, Vista or Windows 7, read our article here.

*Release to Manufacturing: the final code-complete version of a software that is tested before public release.s

**By that I mean purely in terms of how people reacted and adopted to it.