A video of the Xiaomi Mi 4 smartphone running Windows 10 for phones has just been posted online, showing Microsoft’s OS running on a device that ships with Android out of the box. What is this wizardry? Head over the jump to find out more about this development and watch a video of the OS in action on the phone.

A few weeks back, Microsoft announced that as a part of its Windows Insider Program, it was stepping up its game concerning Windows 10 for phones by working with Xiaomi to provide power users a chance to experience Microsoft’s latest mobile OS on their device. 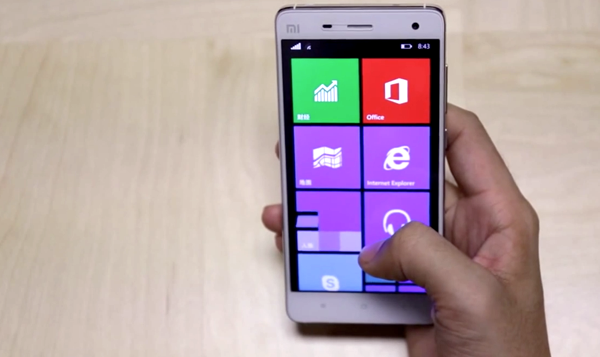 And now, a video has surfaced showing the entire thing in action. The three minute long video is entirely in Mandarin, so unless you speak the language, you’ll just have to focus on the visuals at hand. The OS does look surprisingly smooth given how the phone wasn’t really built for running Windows 10. Microsoft’s idea was to achieve this by throwing in a custom ROM to Mi 4 users who would be able to flash it onto their phones, which is exactly why it was intended for ‘power users’. Essentially, this replaced the existing Android OS on the device with a Windows 10 based ROM, giving users a native experience.

Given that this is the first instance of such an initiative seen on an Android device, and we can see how smooth the overall functionality is, the road ahead is looking pretty good for Microsoft’s latest mobile OS. We already know that the software giant has planned to make Windows 10 free for all smartphone and tablet sized devices, and by making such custom ROMs available to Android users, it looks to have figured out a way to penetrate a market that is dominated by Google’s mobile OS and Apple’s iOS.

Microsoft had already said during the announcement of this initiative that it would be looking to expand the program to more Android devices in the future as the responses from Xiaomi users come in.