Samsung’s Galaxy S6 and S6 Edge have retained the fingerprint scanning feature introduced with the Galaxy S5, but this time around the Korean giant has made it far less annoying to use – to put it more bluntly. The S6 now features a more iPhone like Touch ID tech, and we see what it’s like, right after the jump.

Persisting with the fingerprint scanner on the Galaxy S6 is no surprise, the company realized that the whole swipe-to-scan fingerprint scanning ordeal was just not cutting it for most users, with the feature seeing some hiccups during everyday use. Now, users just simply hold their thumb or finger over the home button / fingerprint scanner, and voila! Sounds familiar? That’s how Apple has been playing it since the iPhone 5s. 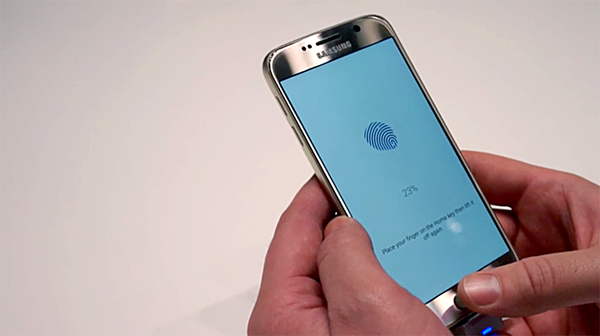 Even setting up the fingerprint ID is as easy as the iPhone now, and more so, the interface or the animation of the progress is eerily similar to how it’s done on iOS. It’s one thing to borrow tech, you can’t really do much on that front, but the animations and interface? Come on, Samsung!

If you move past the whole Apple / Samsung hybrid bit with that fingerprint scanner, the setup is exactly like it’s been done on an iPhone, with users pressing and removing their thumb or finger periodically in a variety of orientations so the phone can learn exactly what your fingerprint is like. In case a fingerprint is not an option for some reason, users can set up a backup pin code.

So, how do you wake up your new Galaxy S6 / S6 Edge and jump right into the home screen? Tap (don’t press) the home button once and hold on to it as it enters the lock screen only to fade away into the home screen. Sounds familiar? The unlocking period is pretty quick, so you have to give it to Samsung for managing all this, albeit with some daring mimics.