Apple has flipped its internal switch on the final release of watchOS 4.2.2 and tvOS 11.2.5 download. The immediate release means that both platforms are now freely available to download and install on all compatible Apple Watch and Apple TV devices.

We’ve been expecting this public release for quite some time. Both firmware releases are in existence to try and push their respective hardware platforms forward. Check out the information below to find out everything that you need to know. 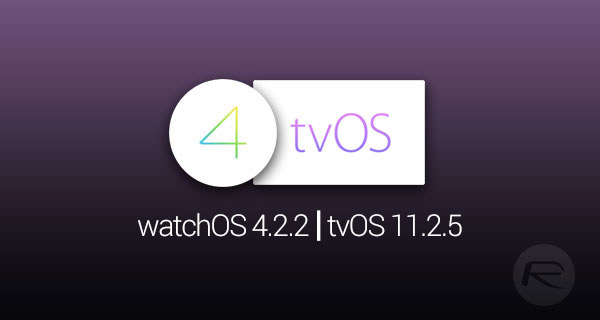 watchOS 4.2.2: As the naming convention suggests, watchOS 4.2.2 is very much about the progression of the platform and stabilizing the new features added in watchOS 4.2 rather than attempting to furnish Apple Watch with additional functionality. With that in mind, this is very much a minor point release which the public can benefit from, and which is available to all Apple Watch models, including the originally released hardware. It’s likely that Apple has one eye on the future of watchOS with a larger release currently in-development in Cupertino, but, for the time being, watchOS 4.2.2 is about progression.

Anyone with an Apple Watch is now able to download and install the latest watchOS 4.2.2 update as an over-the-air update directly through the companion Watch app for iPhone.

tvOS 11.2.5: A lot of Apple TV owners may be slightly perturbed by what seems like a lack of progression and direction for tvOS. Whenever there is a lot of focus placed on macOS, iOS, or watchOS to some degree, tvOS generally fails to command the same level of excitement when it’s put through an update. This latest release, which comes with the tvOS 11.2.5 naming convention, isn’t really going to change that but is a necessary release as it looks to consolidate the firmware on Apple TV and make things a lot more stable and usable for Apple TV 4 and Apple TV 4K owners. There is no real functionality improvements or feature additions to be found within but we are looking at a release which will likely set compatible Apple TVs up for a big update in the coming months.

Anyone in ownership of Apple TV 4 or Apple TV 4K is now able to head into the ‘Update’ section of the ‘Settings’ and grab the latest release with immediate availability.