Watch The iPhone 6 Take A Dip In ‘Hot Ice’ [Video]

Sodium acetate, otherwise known as ‘hot ice’, is a pretty awesome solution since, when disrupted by a cool object, it quickly morphs from a liquid to a crystallized, ice-like composition. The reason for this little bit of background information is because one YouTuber has decided to see what happens to one of tech’s most sought-after devices when submerged in hot ice, and as you’ve probably guessed from the title, the "cool object" in this instance is none other than the Apple iPhone 6. As you may also have gleaned from past experiments of this nature, the results are pretty darned epic.

From iPads dropped in molten lava to the gazillion drop tests, folk have found plenty of ways to gauge the ruggedness of our mobile devices, destroying plenty of them in the process. This latest clip falls somewhere in between destructive and useful, for while the heat of the sodium acetate could do serious harm to the innards of the device and cause it to overheat, we can vaguely assess the iPhone 6’s merits in protecting itself against the elements. 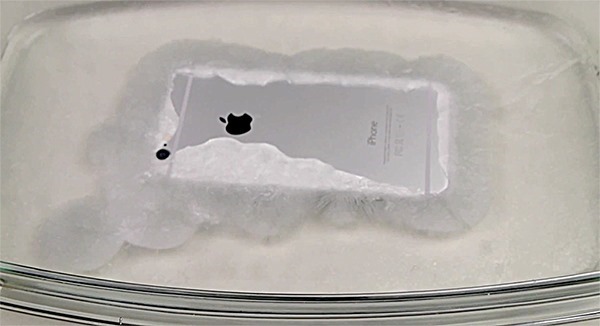 Not that sodium acetate is a part of the mobile device owner’s Unofficial Book of Everyday Hazards, but that doesn’t stop us wanting to watch this clip from YouTuber TechRax, and once you do, you will surely be in awe of how quickly the solution reacts to the iPhone’s presence and begins to set.

Amid the wonders of science, the iPhone more than manages to stand its ground, and while the device isn’t splash proof or water resistant (come on now Apple…) it still appears to be functional even after a decent amount of time bathing in sodium acetate.

Despite its triumphant emergence with no apparent damage, we would, of course, not recommend repeating this experiment at home, with your own iPhone 6. Sure, it’s better able to hold its own than past iPhones, which would often seize up at the first sign of steam, but until Apple decides to add some kind of water-resistance to the iPhone, keep it away from all forms of liquid and dust.

Anyway, have a look at this particularly awesome iPhone 6 test embedded below, and leave your thoughts with us in the comments.