Obama’s new video has the United States Commander in Chief goofing around doing all sorts of crazy things, and even using the selfie stick, in an effort to promote the new ObamaCare (health) initiative. Watch the complete video right after the jump.

A straight-forward video of Barack Obama doing things what pretty much everyone does, but does not spill a word to anyone. Aptly titled "Things Everybody Does But Doesn’t Talk About," you can watch the U.S. President draw cartoons, eat cookies and milk, play imaginary basketball, and even practice a speech about the healthcare initiative in front of the mirror. You know how you talk to yourself when alone, because you’re that cool, as are we? Well, Obama does that too, or at least he wants you to think he does, in a video that can be best described as a public relations effort as well, which mixes up well with what Obama actually wants you to do. That is, to visit the U.S. healthcare website and register for the 2015 medical coverage. 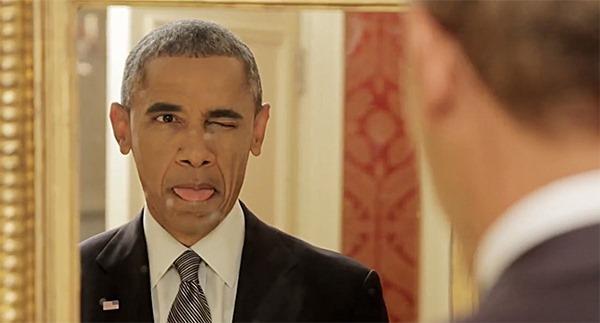 Some of the coolest lines coming in from Obama include, "Thanks, Obama", "YOLO, man", and when caught goofing around by a guy, "Can I live?" The President is obviously taking the time out to relate to the public, and show them that he is after all; one of them.

Where this video is going viral with almost 3,758,266 likes and 20,812,123 views on Facebook – at the time of writing – Obama was also revealed to be one of the first few people to have seen the first iPhone prototype in a meeting with the late Apple co-founder Steve Jobs, back in the days when Obama had not started his Presidency term. This information was revealed by Obama’s chief campaign advisor in a book that he had recently published.

What do you make of Obama’s BuzzFeed video? Let us know what you think, in the usual comments section below.