Just yesterday, Samsung took a clever jab at not just one of its competitors, but three of them at the same time, by unveiling a video on its YouTube channel showing the Korean flagship, the Samsung Galaxy S5, taking the ALS Ice Bucket Challenge and nominating Apple iPhone 5s, the HTC One M8 and the Nokia Lumia 930 to do the same. It appears that two of the nominees –  namely, HTC One M8 and Lumia 930 – have taken up the challenge and took a dip in ice cold water.

Samsung’s nomination of three of its biggest rivals was a clever play for a feature that’s unique to the Galaxy S5, which is the device’s IP67 waterproofing certification. This basically means that the Korean smartphone can be submerged into 3 feet of water for up to 30 minutes without any damage occurring whatsoever, and hence, the Ice Bucket Challenge was piece of cake for the S5. However, iPhone 5s, Lumia 930 and HTC One M8, which are all current flagships from their manufacturers, don’t have any such feature, and therefore, taking the ALS Ice Bucket Challenge could’ve spelt death for them. 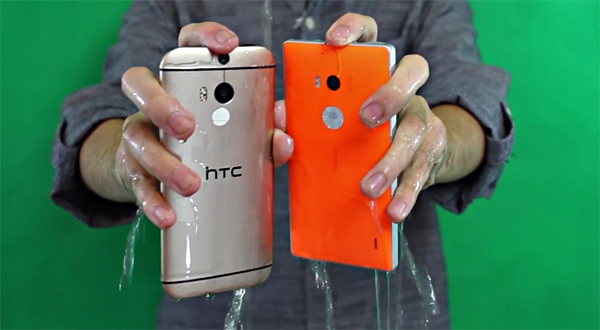 The question here is, then, how did M8 and Lumia 930 respond to Samsung’s challenge? Basically, both these devices feature some form of water resistance, but it’s nowhere close to full-on waterproofing that S5 holds. However, a singular stream of water in one go is something that probably both Lumia 930 and HTC One can survive, and that’s precisely the result that we see from the video that was uploaded by YouTube channel Cellphone S. You can watch the video below.

The ALS Ice Bucket Challenge is one of the most popular topics around the web these days, with an increasing number of people taking part in the challenge in an effort to help the Motor Disease Organization. Of course, being creative about it helps, but Samsung’s ploy from yesterday indicated that it can be a good marketing opportunity as well, along side helping a good cause. The response from Cellphone S also comes in good humor, and just by the way, doesn’t represent any official HTC or Nokia sources.

Let’s just wait and see if someone gives the iPhone 5s a dunk in ice cold water. We’d love to see that one!