Everyone loves a good feature packed update to an already extremely functional application, which is why the latest version of the Showyou video discovery app is bound to invoke a wave of downloads as well as sounds of satisfaction from existing users. Investor funded Remixation has been keeping a close eye on the usage habits of users while inspecting the development of the social scene in parallel with that research, all of which has resulted in version 4.1 of the app going live with a wave of new social-based features.

Showyou isn’t exactly a stranger to the social scene. At the very heart of the application, the underlying functionality contains a social heartbeat that allows users to discover videos that have been recommended based on social feeds. The latest updates builds on that idea by introducing what the company are calling a "social tray". The tray allows users to make a simple swipe gesture to get up and running, which in turn shows the user what his/her connections and friends are watching in real-time.

Remixation have also paid additional attention to the way users connect with one another through Showyou. Rather than have a fragmented search and invite experience, dedicated Showyou fans are now able to search through currently subscribed users as well as invite friends to become users within a single step. The new notifications and comments section is also another indication that Showyou is attempting a build on the current status and prove itself as a social behemoth.

Previously watched videos from friends are immediately viewable with users able to share their reactions to the content with a single tap. All of that information is immediately send back-and-forth between friends for a truly real-time social experience. Mark Hall is the Chief Executive of the San Francisco based Remixation and states that he and his team noticed a patter in the way content was viewed and shared, a discovery that has led to the changes we are seeing in Showyou 4.1.

The improved Showyou universal app is available as a free-of-charge download from the App Store for new users, or live as an update right now for those who have previously been enjoying the video discovery services of the app. 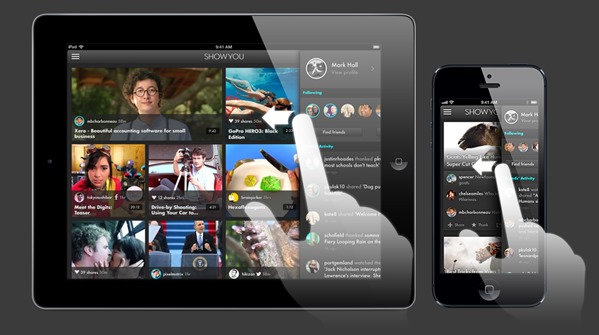