Viber, the extremely popular VoIP application is used by countless iOS users around the world to make calls, start instant message conversations and generally keep in touch with the people that matter most to them directly from the palm of their hands. Version 2.3.0 of Viber is live in the App Store now, and features a number of notable improvements that makes using the app a whole lot more fun and social.

The first update focuses on attempting to make text messaging a more fun experience between users by introducing the ability to attach and share stickers in conversation streams. The ability to share stickers is also complimented by the addition of being able to add location data to messages so that friends and family can see exactly where you are at that particular moment in time, in short you can send your location as a separate message instead of attaching it to a string of text. This attaching of location isn’t exactly new functionality in the mobile space, but it is the first time that Viber users have been able to attach geographical information without sending an accompanying string of text.

The messaging fun doesn’t end there either with this new update. The Viber team have also bowed to pressure by adding the ability to attach emoticons to messages that are being sent out through the application. I personally don’t care too much for the use of emoticons and generally prefer descriptive plain text to get the point across, but there is a seriously large percentage of iOS users who feel that those little colorful images go a long way in enriching a messaging experience on mobile devices. 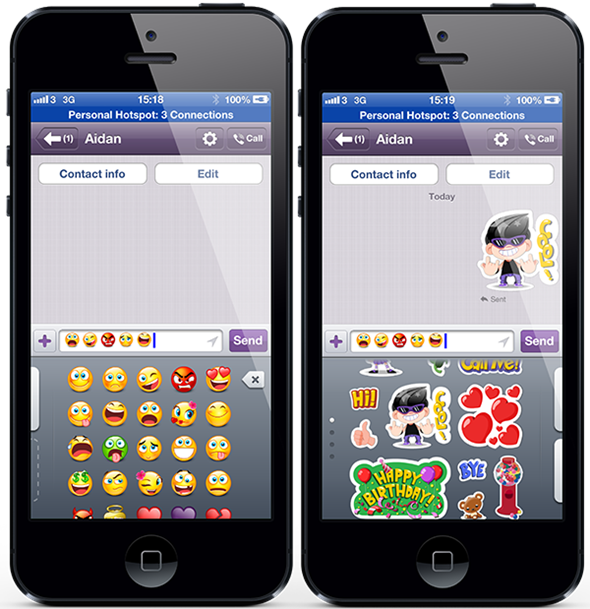 The user interface has a number of notable changes that fit nicely with the optimization for the new iPhone 5, as well as adding the small support changes needed to be fully compliant with iOS 6. Considering Viber is still entirely free of charge, supports all iPhone models capable of running iOS 4.3 and above and contains no advertisements, it is still one of the best apps of its kind on the App Store.

(Source: Viber for iPhone on the iOS App Store)