Use Your Keyboard’s Number Pad To Snap Windows Around Corners Of The Screen, Like Aero Snap, Only Better

When Microsoft introduced the Aero Snap feature into Windows, the company fixed a problem that many people, including most of us here at Redmond Pie, didn’t realize we had.

By making it easy for users to maximize windows and open two windows side-by-side on-screen with the minimal of fuss, Microsoft made window management something that we actually thought about. It also meant that we did not need to fiddle around resizing windows in order to get, say, two Chrome windows open beside each other or two Word documents open above and below each other. It was genius, even if we did not really fully understand it at the time. 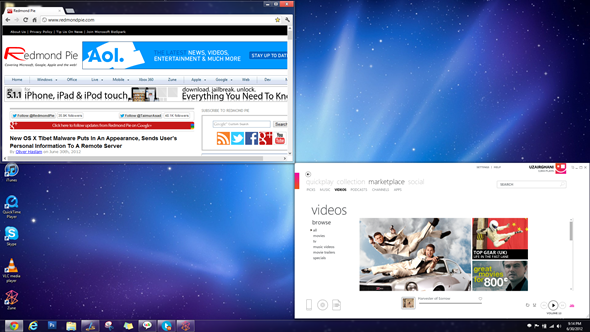 But could Microsoft have gone further?

WindowPad, a new app for Windows, suggests so.

WindowPad is available for free, and it adds a feature to Aero Snap that takes things just one step further and makes window management even more useful.

The premise is a simple one. Press and hold the Windows Key and then press a number on your keyboard’s number pad. You know, that whole area of your keyboard to the right that you probably don’t use other than to collect crumbs of cookies and the like.

Pressing different numbers will see your apps and windows spring into action, with WindowPad moving them to an area of the screen based on the number you have pressed. For example, Win+Numpad1 will see your windows fill bottom-left quarter of screen. Win+Numpad2 will fill bottom half of screen. The full list of commands is available at the source and are well worth trying to remember. 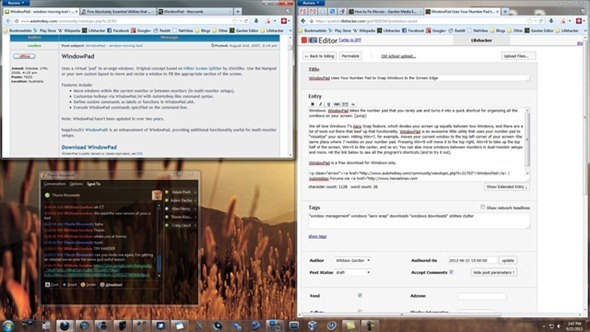 Multiple monitors are supported too, with WindowPad throwing apps across multiple monitors should you have them. It’s some sort of voodoo or black magic, but it works and works well. If you’re forever moving windows around your desktop, trying to get the pixels to lineup just so, then WindowPad is right up your street. The fact that it’s free is just a big, bug bonus!

The downside? Well, WindowPad hasn’t seen an update in quite some time, so if you find any bugs or problems then the chances are you won’t be getting them fixed any time soon. Still, it’s free, right?