Unlock Galaxy Note 2 Bootloader With Casual, A Simple And Handy Tool For Windows And Linux [VIDEO]

If you are a Galaxy Note II and had it unlocked, you might have been disappointed when Verizon sneaked a new bootloader last week and re-locked it. Thankfully, a new solution is available now through a new exploit and a slight update for the user-friendly CASUAL tool.

This new exploit was discovered by developer Ralekdev, it is a completely different exploit that gets around Verizon’s patch. CASUAL is a user-friendly tool for Windows and Linux; it will auto-flash the exploit on Linux, while Windows users will have to resort to Odin in order to apply it, which is an easy process regardless. After a few reboots, your Galaxy Note II will launch into recovery mode, making it incredibly easy to make backups and, of course, flash the device. It is quite easy.

CASUAL itself has received some minor updates as well that add to its mission of providing a user-friendly way to root different Android devices, such as the Droid RAZR and of course the Galaxy Note II. These changes include a built-in “kill switch”, which can be useful in a lot of circumstances. There is also automatic updating bundled in, both for scripts and the application itself: should users attempt to run an old version of a script, this one will be replaced with the newest revision before any work is done on the device. This can be a lifesaver under certain circumstances. 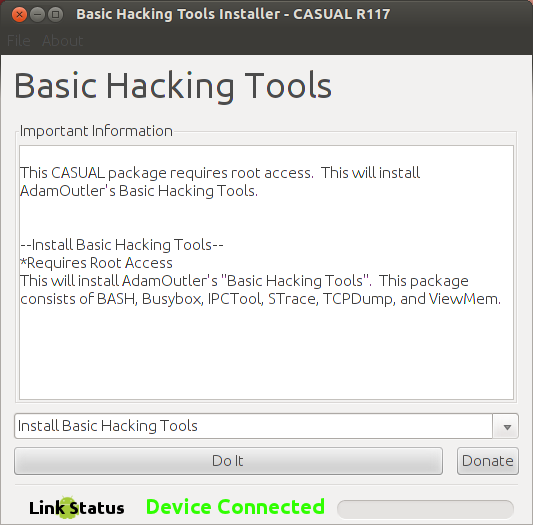 If you are a fan of Samsung’s phablet, unlocking it won’t cause much harm with this easy tool. Your warranty will obviously be voided, yet if you are interested in customizing your software, the benefits greatly outweigh the risks. There is nothing stopping Verizon from patching the bootloader once again as easily as they did before, however there will always be another workaround. It’s a permanent cat and mouse game.

Whether you are on Linux or Windows, you can download everything you need online to unlock your Galaxy Note II. If you are hoping for Mac support in this release, you will be disappointed, since it isn’t present quite just yet. If you haven’t done it already, make sure you download and install the latest version of Java. Happy jailbreaking!