It has come to light that Samsung is set to face yet another embarrassment, this time at the hands of its washing machines. Yes you read that right!

After having to issue a worldwide recall for defective batteries in its Galaxy Note 7, the last thing Samsung wanted was “exploding” issue to occur in another one of its product lines. Unfortunately for the South Korean company, it looks as though it will have to deal with yet more problems sooner rather than later with the United States Consumer Product Safety Commission (CPSC) issuing a safety warning over Samsung top-loading washing machines that are said to have been known to explode. 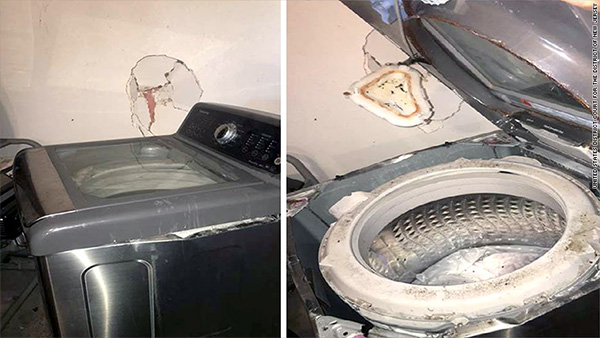 A total of twenty-one individual consumers have reported instances of exploding top-loading Samsung washing machines to the Consumer Product Safety Commission since early 2015. That may not exactly seem like a dramatic amount of complaints, but when you take into consideration the fact that they have been reporting that their washing machines have been totally exploding or blowing apart, you start to understand the severity of the situation and how it could be a worrying hazard within the home.

Product owners in Georgia, Indiana and Texas have all reported hearing a loud boom when using one of the defective Samsung washing machines, with one owner explaining that it “exploded with such ferocity that it penetrated the interior wall of her garage”. The company is also facing a class-action lawsuit in New Jersey over the problem. Based on the back of those complaints, the United States Consumer Product Safety Commission believed there was sufficient enough cause to issue an official warning over top-loading Samsung washing machine units that were manufactured between March 2011 and April 2016. No specific model numbers were provided as part of the CPSC warning but Samsung has launched a page where you owners can check whether or not they have defective washing machines.

According to the lawsuit, Samsung “has moved aggressively to collect and destroy all evidence of the defective machines” after they exploded. Samsung has not commented on the litigation, but as you might expect, Samsung has already made comments, stipulating that it is currently working hand-in-hand with U.S. regulators to “address potentially safety issues” in the concerning product lines.

Alongside that statement, Samsung has also warned that certain machines could be subjected to abnormal vibrations when washing bulky items or large loads, which in some cases could be classed as a safety risk or cause damage to property. Not exactly the behavior you want from the machine tasked with getting your whites whiter than white.

If you have a top-loading washing machine manufactured by Samsung, and want to check if the product could be susceptible to the issue, even if you haven’t received any warning that it could be an issue, then you can enter the serial number of the washing machine as a precautionary measure here: pages.samsung.com/us/top_load_washer/index.jsp