The official Twitter app has taken a fair bit of stick over the years, especially with the likes of Tweetbot hanging around, but it’s fair to say that in recent times, things have improved dramatically. Today, Twitter for Android and iOS have both been given rudimentary updates, with the main alteration being that conversations between tweeters are now clearer, rather than showing up as individual tweets.

There’s nothing worse than checking the Twitter feed and seeing part of the conversation, and when you try chasing it up, feeling like you’re on a treasure hunt. Twitter has finally addressed this issue, and with the feed now showing the three most recent tweets within a conversation, you can get a bit of context on what’s going on. If you wish to probe the conversation further, simply tap on it, and the interface will extend to show the full correspondence. It’s that simple.

It may not be much to write home about, but as a Twitter user, I’ve enjoyed witnessing and experiencing the recent emphasis on enhancing the general user experience, even if it means small but frequent updates. The new tactic is very a la Google, and although developers often like to hold things back before pushing one big update at a time, this way, the user wins hands-down.

As well as making it easier for users to pry on the conversations of others, those back-and-forth chats are also now distinguishable from general tweets thanks to a subtle blue line, which sits right alongside a tweet. Whether you’ll learn to auto-pilot ignore these tweets remains to be seen, but if you simply wish to quickly scan the world of The Twitters, the blue marker could be a rather useful time-saving device. 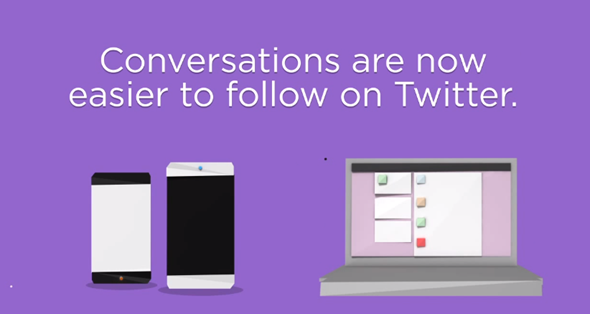 Finally, users can also now readily report abuse of the network right from the mobile apps, as well as the Web interface, and considering the recent furor concerning such practices across the Interwebs in general, this kind of implementation should be greeted with open arms.

You can download the official Twitter app for Android from the Google Play Store right now, or, if you already have the app installed, simply update it. Same goes for iOS, which is now available over at the famed App Store. The changes are also being rolled out for Web users as we speak.