To celebrate the launch of Star Wars Episode 1: The Phantom Menace in 3D, producer Lucasfilm has released a fun app for Android users named Darth Maul Me.

Following a similar motif of the "-booth" apps, it allows you to turn your face completely into Darth Maul himself or use some of his distinct features in order to create a humorous image. All you have to do is take a snap of yours – or anybody else’s – face, and you too could be Darth Maul in just a matter of seconds.

For those unaware, the Phantom Menace will be hitting cinemas from early February, giving Star Wars junkies their first taste of 3D. Even for those not so keen on the political affairs of another galaxy, Star Wars – with all its special effects and whatnot – does seem like the ideal candidate to benefit from three dimensional viewing. 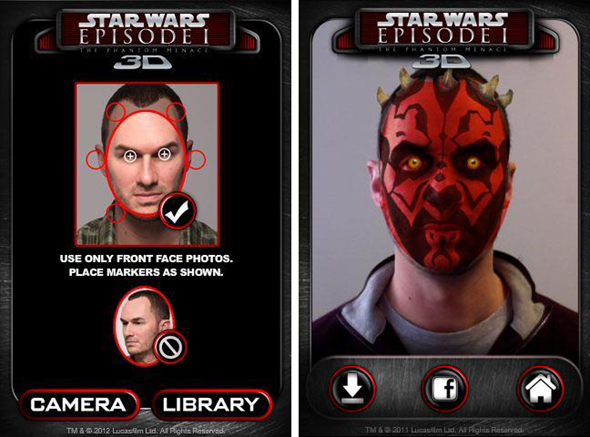 It would have been nice if the producers had brought out a new film rather than simply 3D-ifying an old release, but the Phantom Menace was, from what I remember, a pretty decent flick. It took us back to the roots, when Darth Vader was a mere whipper-snapper named named Anakin Skywalker and Obi-Wan Kenobi was a rather aggressive young Jedi Knight. The first segment of of the Star Wars saga documents Anakin’s journey in his pursuit of his dreams and the turmoil and obstacles he faces along the way.

Despite 3D motion picture really enhancing certain movies, the jury remains out on whether the world will ever truly adopt it. As with all new technologies, the prices for 3D TV’s are sky high, and glasses are dogged by limited compatibility. As any fellow couch potato could vouch, keeping tabs on a couple of remote controls can be difficult enough in itself, and adding two, four, even six pair of rather delicate specs to the mix makes things neigh-on impossible.

That’s not to say we don’t relish the thought of seeing those light-sabre stand-offs in three dimensions though. Star Wars Episode 1: The Phantom Menace comes out next month, and if you’re a fan, you’d be crazy not to book tickets and go see it.

Until then, the Darth Maul Me app should keep that inner Star Wars fanaticism under control.