We’re coming up to the end of 2011, and everyone is writing their ‘top apps of the year’ lists, and Apple is no different. Under the heading of ‘App Store Rewind 2011’ Apple has listed the apps it thinks have caused a stir during 2011, with both apps and games getting shown off. As well as announcing the company’s favorite apps, Apple has also released new charts showing which apps were downloaded the most through 2011, as well as which grossed the most money. Interesting reading, if you like that sort of thing. 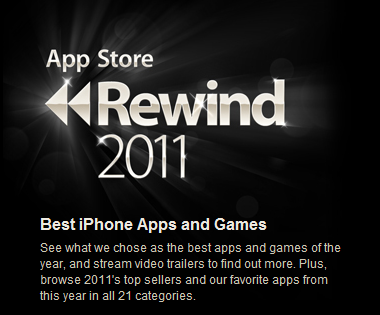 Apple has also broken the list of apps down into iPad and iPhone releases, while naming an App Of The Year for both as well as a selection of runner ups.

For its iPhone app of the year, Apple has chosen Instagram, the photo-sharing social network that has taken iOS by storm.  Listing the filters as a big plus, Apple believe that with Instagram it is ‘near-impossible to take a bad shot.’

The top game is, predictable, Tiny Wings. Having really established itself as one of the most-played games on iOS late in the year, this game has kept many people quite for hours on end.

The runners up for both the app and game of the year include Momento and Tiny Tower, both of which have received critical acclaim throughout 2011. Tiny Tower’s success has even seen it ported to Android.

Apple’s iPad app of the year is djay, a turntable app that offers multi-touch scratching for the musically inclined.

Game of the year goes to Contre Jour HD. A physics puzzle, this game stylized graphics and presentation will be a hit with anyone that enjoys a game that involves a little bit of thought.

Runners-up for the two categories include Star Walk for iPad and SHADOWGUN.

As well as choosing their own favorites, Apple has released 2011’s top iPhone/iPod touch and iPad app charts, covering free, paid for and top grossing categories.

While we perhaps wouldn’t want to tell Apple which apps to choose for its awards, we’re sure there are a few apps and games that haven’t made the lists that some would have chosen ahead of the ones that did. No Instacast, no Verbs IM? With Whale Trail being something of a phenomenon right now, we may have expected that to have put in an appearance, too. We’re actually quite surprised that a lot of great apps didn’t make it to the list, but we’re sure Apple has some strong reasoning behind it, right? Let’s move on.

All of the above listed app and games can be downloaded by heading over to this link.